The team competed against more than 8,000 students from 340 schools. This was the team’s second showing at nationals and its first time placing in the top five.

“This represents Utah State well. As a team, we’re the top in the nation,” said Collette Tebeau, equestrian team coach.

In the horsemanship class, contestants were judged on their riding capability and their ability to execute patterns. The reining class was judged at a faster pace that included sliding stops and fast spins. In both classes, riders were only allowed to see their horses an hour before the show.

In the individual events, Romney appeared four times, placing in the top five each event. Zach Schmidt and Kelsey Wilson each placed eighth and Darby Robertson placed in the top 20.

To qualify for nationals, the team competed at the IHSA Western Semifinals in Findley, Idaho, March 26-27. Competing against teams from Montana, Idaho and Utah, it placed second, just one point behind the University of Findley.

Placing at nationals qualified Romney for the National Horse Race Association Derby in Oklahoma City in June. The NHRA selects 12 competitors from the entire nation to compete in the Invitational Reining Class. It will be Romney’s third and last showing at the derby.

“This is a prestigious event,” said Romney. “These are the top trainers and competitors in the nation.”

Tebeau said the club has taken enormous strides in the past year in becoming nationally recognized. Because horse shows and competitions originated from the East Coast, western schools are often overlooked. However, USU’s team has proven itself as a formidable opponent.

“Utah State is starting to draw people from all over the United States to look here because of the equestrian team,” said Tebeau. “Kids around the country see this and they want the education as well as the team.” 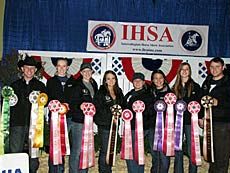