Several types of evergreen trees and shrubs in northern Utah are showing signs of significant foliage damage this winter. Damaged foliage often turns purple, and if irretrievably damaged, will turn brown and eventually drop off.

According to Michael Kuhns, Utah State University Extension forestry specialist, this is happening mostly to species that are not extremely cold hardy. Significant damage has been shown in evergreen conifers, including giant sequoia and blue Atlas cedar, but other species may also be affected.

“Most pines, spruces and junipers seem to be unaffected,” Kuhns said. “Though there aren’t a lot of broadleaved evergreen trees and shrubs in northern Utah, some of them, like euonymus, are showing damage too. Damage tends to be worse for plants with a great deal of sun exposure and also tends to be worse on the south and west sides of trees and shrubs where they get more sun.”

Kuhns said the likely reason for most of the damage this winter is a weather pattern that occurred in mid-to-late fall when temperatures were fairly mild, followed by a quick drop to low temperatures.

Kuhns said things changed Nov. 24, however, when the daytime high reached only 15 F and the low was 1 F. Nov. 25was even colder, with a high of 9 F and a low of -9 F. Temperatures through the end of December became fairly mild, with many highs in the 40s and lows often in the mid-to-high 20s and low 30s. A similar pattern, though not as dramatic, showed in weather stations in Kaysville, Santaquin, Vernal, Fillmore and Cedar City.

So what do these temperature patterns have to do with brown evergreens?

Kuhns said the mild November temperatures followed by very cold temperatures meant some trees that are weren’t as cold hardy may not have been completely hardened off in late November.

“Plants go through a process of hardening their tissues as winter approaches,” he said. “Sugars and other materials accumulate in cells, and other changes occur that allow plant cells to withstand cold temperatures. Plants that are well-adapted to an area rarely get fooled. They start the hardening process early in the season so they are ready for anything that comes their way.”

Kuhns said non-native plants from warmer climates may start to cold-harden early if temperatures get steadily colder early, but will wait until later in a warm fall. If they wait too long, they get caught with tissues that aren’t cold-hardened when the weather finally turns cold.

Another factor for brown evergreens in some locations may be dry soils, Kuhns said. Evergreens lose moisture from the stomates in their leaves all through the winter, especially when temperatures are mild and when foliage is exposed to a lot of sun.

“This moisture has to be replaced by uptake from the soil or the foliage will dry out and turn brown,” he said. “At times this winter, we have had extended periods of fairly mild temperatures and have lost snow cover. This could mean that there was some soil drying and therefore foliage drying.”

Kuhns said there is a good chance that, for most of the trees and shrubs that are showing damage, the buds for this coming growing season weren't damaged. If so, they will bud out normally this spring and new twigs and new foliage will form.

“All we can do is wait and see and not be in too big of a hurry to remove damaged plants or prune out damaged areas,” he said. “If your soil dries out and thaws in the winter and you are able to water trees and shrubs, do so. When planting less cold-hardy plants, locate them in shady areas protected from lots of direct sun and wind. If possible, plant them on the north sides of buildings or other large plants.” 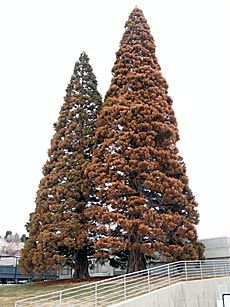 Giant sequoias at the Utah State Capitol show signs of this year's damage. 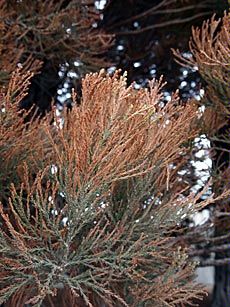 A closer look at the needles and tree damage.