Elaine Thatcher, director of the Mountain West Center for Regional Studies at Utah State University, has been awarded the Benjamin A. Botkin Prize from the American Folklore Society. Thatcher received the award at the American Folklore Society’s annual meeting held Oct. 18-22 in Milwaukee, Wis.
The prize is given annually to a folklorist for outstanding achievement in public folklore — a field that includes diverse activities, including exhibits and festivals aimed at making the public aware of the nation’s traditional cultural heritage. Rather than honoring a specific achievement, the award recognizes consistent contributions over a career.
Thatcher’s career is as impressive as it is diverse.
“We are thrilled that Elaine has received this impressive national recognition,” said Gary Kiger, dean of the College of Humanities, Arts and Social Sciences at USU, the administrative home of the Mountain West Center for Regional Studies. “We are most fortunate to have Elaine on our campus — she has worked across the country, and she brings an impressive background to her work here. Through her efforts, the Mountain West Center has presented many outstanding programs, including last summer’s Mountain West Songfest and Symposium. This award is an honor well deserved.”
Thatcher has previously been recognized by the Utah Humanities Council for her work with the songfest and symposium. She was attending the American Folklore Society’s annual meeting and was on hand to accept the award, which she described as “a huge surprise.”
Having previously served on the award’s selection committee, Thatcher is familiar with the accomplishments of past recipients and is honored to join their ranks. She is the 13th recipient of the award, noting that fact with the sly acknowledgement of a non-superstitious folklorist.
“I know the committee looks at a variety of factors, but the recipient’s entire body of work is considered,” she said. “This is an immense honor, and I’m truly humbled by the award.”
The award reinforces Thatcher’s valuable contributions to the university and to the Mountain West Center for Regional Studies, Kiger said.
In 1983, Thatcher was the first student to graduate from USU with a master’s degree focused on folklore. Since that time she has worked throughout the country, including contracts with the Library of Congress and the Smithsonian Institution. She was the first state folklorist for South Dakota and completed the first comprehensive field research in that state, identifying numerous traditional artists, from Lakota quill workers to Norwegian rosemalers (decorative painters). Later in her career, she was involved in the creation of one of the nation’s most respected cowboy arts and crafts shows, “Trappings of the American West,” at the Coconino Center for the Arts in Flagstaff, Ariz. She also worked for many years with the Western Folklife Center, which produces the annual National Cowboy Poetry Gathering in Elko, Nev.
In 1993, Thatcher became the first regional folklorist for the 12 Western states, working through the Western States Arts Federation, then based in Santa Fe, N.M., and providing services and support to folk arts programs and artists throughout the West. She operated a consulting firm from Santa Fe for five years before joining the staff of the Mountain West Center at USU in 2001.
Over the years, Thatcher said she has put a high priority on mentoring younger folklorists entering the field. Among her many accomplishments, this contribution was specifically noted in the presentation of the Botkin Prize.
The Botkin Prize is given in recognition of the work of Benjamin A. Botkin (1901-1975) He was an eminent New Deal-era folklorist, the national folklore editor of the Federal Writers’ Project in 1938-39 and an advocate for the public responsibilities of folklorists. He was an author and compiler of many publications on American folklore for general audiences and was head of the Archive of American Folk Song at the Library of Congress from 1942 to 1945.
Past recipients of the Botkin Prize include Bess Lomax Hawes, who headed the Folk Arts Program at the National Endowment for the Arts for many years; Richard Kurin, director of the Smithsonian Institution’s Center for Folklife and Cultural Heritage; Nick Spitzer, host of National Public Radio’s “American Routes” program; and Hal Cannon, who was Utah’s first state folklorist and who founded the Western Folklife Center and the National Cowboy Poetry Gathering.
The award’s presenter, the American Folklore Society, was established in 1888 and is the primary academic society serving the fields of folklore studies and public folklore. Its offices are in Columbus, Ohio. Additional information on the society and its programs can be found at its Web site.
The Mountain West Center for Regional Studies is a unit of the College of Humanities, Arts and Social Sciences at USU. It was established at USU in 1986 to advance the understanding of the Mountain West region through interdisciplinary studies and to link university expertise with regional needs and interests.
Contact: Elaine Thatcher (435) 797-0299
Contact: American Folklore Society, Timothy Lloyd, lloyd.100@osu.edu 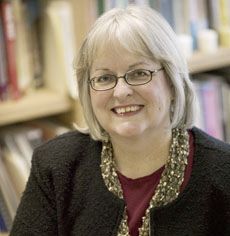 Elaine Thatcher received the Benjamin A. Botkin Prize from the American Folklore Society. The prize is given annually to a folklorist for outstanding achievement in public folklore.