Utah State University students are restoring a small piece of history tucked away in a hidden aspen meadow in Utah’s Logan Canyon. Built in the early 1950s, Doc’s Cabin occupies about an 18-by-18-foot plot on U.S. Forest Service land adjacent to USU’s T.W. Daniel Experimental Forest some 19 miles northeast of Logan.
Named for the late T.W. “Doc” Daniel, a professor in the College of Natural Resources, the small dwelling is crafted from lodgepole pine logs. Daniel and the late Ray Moore, also a natural resources professor, built the cabin with help from their students. Once used as a base of operations for research, teaching and road-building on the “School Forest,” as the Daniel Forest was once known, the cabin fell into disrepair. In recent years, consideration was given to tearing it down.
USU forestry students intervened.
“It’s a part of our history and the forest’s history,” says Donovan Birch, an undergraduate forestry major and immediate past president of USU’s student chapter of the Society of American Foresters. “Last year, we decided to look into the feasibility of restoring it. We felt it would provide students with a connection to the forest that’s been gradually lost.”
Time was, when all USU forestry students were required to pass muster at the university’s infamous eight-week “Summer Camp” at the School Forest under exacting eye of Daniel or Moore. For nearly 50 years, students became proficient with an abney and a clinometer and completed a demanding vertical traverse of the forest’s Benchmark Hill.
But times have changed and so has Summer Camp. Technology, including global positioning systems, has altered the tools of forestry’s trade.  The university’s switch to semesters changed the forestry program’s format and a fire in 1998 destroyed the camp’s mess hall and classroom.
Improved roads and the advent of snowmobiles have made the forest, a site of active USU research, more accessible.
“The cabin was built so that students and faculty working on the School Forest would have a place to stay,” says James Long, professor in USU’s Department of Wildland Resources. “As roads got better and the commuting time more reasonable, the cabin was used less and less.”
By the 1980s, the cabin was rarely used at all for lodging and became a storage place for odds and ends.
“We spent a long Saturday last fall sorting through years of junk that had been gathering in the cabin,” Birch says. “It took two truckloads to get everything down from the canyon to the dump.”
Though two-legged pack rats had long abandoned the building, the cabin had its share of four-legged, six-legged and eight-legged residents, including furry pack rats, mice and squirrels.
“It was kind of disgusting,” says Birch who, along with a group of fellow students, traveled to the cabin this fall to clean and make repairs.
The students salvaged what they could, including some of the bunk beds and lanterns. The old gas stove was beyond repair and, using club funds, the students replaced it with a wood-burning stove and new chimney pipes. The students replaced broken windows with plexiglas, repaired the roof and used caulk to plug gaps in the log walls.
Future chores include repairing and relocating the cabin’s outhouse.
The students’ plan is to make the facility available, at a modest rental fee, for student outings through USU’s Outdoor Recreation Program. The one-room cabin, which features a small attic, will accommodate up to 12 people.
Birch hopes the weather will allow the natural resources students to complete the renovation this fall.
“Rental of the cabin will be a fundraiser for the forestry club,” he says. “It’s a beautiful location — something to bring back the good old days.”
Related links:
Contact: Donovan Birch, donovan.birch@aggiemail.usu.edu
Writer: Mary-Ann Muffoletto, 435-797-3517, maryann.muffoletto@usu.edu 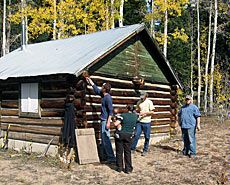 USU's Forestry Club is restoring 'Doc’s Cabin,’ an 18’x18’ dwelling built in the Cache National Forest in the early 1950s. 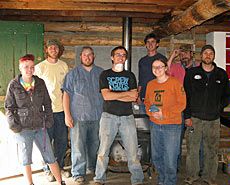 Forestry and other natural resources students are volunteering their time to clean and repair the lodgepole pine log cabin, which will be made available for student outings.