A major challenge in space research is, simply put, getting into space.

From 1982 to 2001, USU’s Get Away Special Team flew 11 GAS payloads on 10 shuttle flights containing more than 30 student-built experiments — the most of any university in the world. But with the close of NASA’s shuttle program in 2011, Utah State University students, along with professional astronauts, have been looking at varied alternatives to get themselves and their experiments into microgravity.

In 2010, 2011 and 2012, members of the USU student team boarded a NASA-contracted microgravity jet — nicknamed the “Vomit Comet” — and successfully flew experiments of their own design in weightlessness. The team is now working on an alternative project.

“Without access to a space vehicle, we have to access space in different ways,” says USU GAS Team member Jorden Luke. “Building a cube satellite gives us another way to get into space.”

The ever-resourceful team is developing an innovative cubesat equipped with an inflatable boom that could demonstrate a way to deploy large structures in space while cutting the cost needed to get them into orbit. In conjunction with their design, the students are preparing a proposal to NASA’s ELaNa program — Educational Launch of Nanosatellites — with hopes of securing a spot on an upcoming launch to get their invention into space within the next year or so.

The Aggies’ planned orbiter is about four-inch square in size. Formally known as the Aerostat Gradient Inflatable Experiment, the Small 1 U cubesat features a planned, meter-long boom that springs forth like a child’s party favor blow-out.

“The boom is coated with a specialized glue that, when exposed to sunlight, hardens and causes the boom to become solid,” says James Gardiner, undergraduate physics major and GAS Team coordinator. “To our knowledge, this has never been attempted before with a cubesat.”

Getting equipment into space is costly and energy-consuming, Gardiner says.

“We think our boom could be a model for compact, efficient storage of structures for travel into space,” he says. “Once in space, the structure could be expanded or ‘opened’ — like an umbrella.”

Gardiner and his teammates envision the technology as a way to supply equipment and repairs, for example, to the International Space Station or to deploy satellites in a cost and energy-efficient fashion.

The boom has another critical function: The slender rod serves as a passive-control mechanism to keep the satellite on its prescribed path.

“Most satellites require some kind of active control to keep them from straying from orbit and spinning out of control,” Gardiner says. “Active control requires some kind of power source, such as batteries or magnets.”

“Think of a child’s toy, like a bobbing ‘Weeble’ or a ‘Tumbling Kelly,’ that always returns to its upright position,” Gardiner says. “This is a similar principle.”

Achieving passive control of the satellite using the boom could be an important feat, he says, because it would significantly reduce the cost and weight of the satellite.

“This could pave the way for other student groups, as well as private and public ventures, to develop satellites because it would make them more affordable,” Gardiner says. “It’s a less expensive and simpler way to control small satellites in low earth orbit.”

In addition to the cubesat project, the USU GAS Team plans to test its inflatable boom design during a high altitude balloon project, monitor solar effects on SpaceX’s ‘POPACS’ satellites and submit a new proposal to NASA’s Microgravity University to conduct yet another USU-designed experiment on a weightless ‘Vomit Comet’ flight.

“We have a lot of interesting projects and we invite USU students of all disciplines to join us,” Gardiner says. 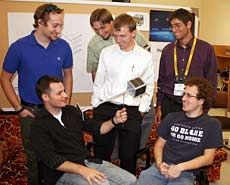 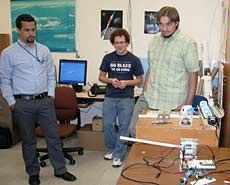