If you can’t see the jungle for the vines, take a lesson from Tarzan – just start swinging.
Is it the most thorough approach to path planning? Maybe not. But if you know the general direction you’re heading, grabbing the nearest vine might get you in touch with Jane, Boy and Cheetah more quickly than stopping to ask for directions.
That’s the gist of an algorithm Utah State University computer science undergraduate Arthur Mahoney is developing with faculty mentor Dan Watson.
The two computer scientists are researching methods to improve network communications in military and commercial robotic applications that safely extend the reach of humans in dangerous environments.
Mahoney was recently named one of eight finalists for the Computing Research Association’s national Outstanding Undergraduate Award for 2008.
“Our focus is on communications in Altruistically Negotiating Systems or ‘ANS,’” says Mahoney, a USU Undergraduate Research Fellow and a recipient of the College of Science’s Willard L. Eccles Undergraduate Fellowship.
ANS, he says, feature a collection of agents with diverse responsibilities that behave in a manner in the best interest of the entire team.
Sounds like a coach or military commander’s dream team, right? Well, yes, says Mahoney, but imagine that each visually challenged team member is working in a vast, fast-changing environment filled with hostile obstacles and doesn’t even know if the other members exist. How do team members communicate with each other?
One of the most common forms of ANS is Unmanned Autonomous Vehicle systems or ‘UAVs.’
“With UAVs, you have a group of robots equipped only with line-of-sight radio communications,” says Mahoney. “Those communications are frequently interrupted by physical obstacles.”
Among the path planning algorithms proposed for use in ANS is a relatively new sampling-based method called Rapidly-exploring Random Leafy Tree. “RRLT has some advantages over older methods but it still has constraints,” says Watson, associate professor in USU’s Computer Science Department. “There are characteristics of the RRLT approach that don’t lend themselves well to a distributed approach – that is, having many agents working together to solve a problem.”
A possible solution?
“Art (Mahoney) has taken the idea of RRLT and tried to come up with a way to randomly sample points in the domain – that is, randomly sample different vines in the jungle and add new vines until agents are found,” he says. “He calls this method ‘The Near-sighted Tarzan Algorithm.’”
With just one year of college behind him, Mahoney presented his and Watson’s findings at the 2006 International Conference on Parallel and Distributed Processing, Techniques and Applications in Las Vegas.
“We got really good feedback,” says Mahoney. “It was a great experience.”
“Conferences are a wonderful way to have your results reviewed by peers and get new ideas,” says Watson. “One of the nice things is that our work will be read by other researchers in this field of study.”
Working on your own research project is much more meaningful than learning facts in the classroom, says Mahoney. “With my research I’ve been forced to solve or work around problems that I would have never dealt with in class – and that’s real computer science.”
Mahoney, who was named a 2007 Goldwater Scholar and a 2006 Governor’s Scholar, also thinks research makes learning more enjoyable. “Programming for a professor’s homework assignments during the wee hours of the morning is tedious, stressful and bothersome – but programming for research during the wee hours is fun,” he says.
“Art quickly learned the protocol for tapping into the university’s undergraduate research opportunities and hit the ground running with this project,” says Watson. “For students with initiative, there’s a path for exciting hands-on learning at USU. There’s definitely a path.”
Related links:
USU Department of Computer Science
USU College of Science
Contacts: Dan Watson [watson@cs.usu.edu], 435-797-2440; Arthur Mahoney [awmahoney@cc.usu.edu] 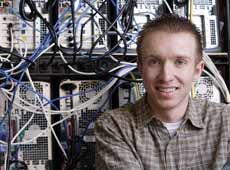 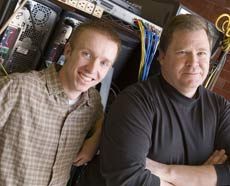