Utah State University doctoral student Dave Iles, with faculty mentor Dave Koons, has been studying the bears’ predation habits for several years along a remote stretch of the Hudson Bay coast in Manitoba, Canada. Yet in observing the great mammals, he and Koons’ primary focus has been another Arctic denizen: the snow goose. The bears, the USU ecologists have observed, are increasingly supplementing their diet with the birds and their eggs as a result of warming temperatures.

Iles is a featured researcher in an article describing this phenomenon published Sept. 22, 2014, in The New York Times and a stunning, accompanying video.

“Monitoring polar bear predation is only one angle of our study, but a really cool one,” says Iles, a Quinney Fellow in USU’s Department of Wildland Resources and the USU Ecology Center. “Polar bears are responding to climate change much more quickly than the geese and might be overlapping with nesting geese in some years.”

If that’s the case, Iles, Koons and colleagues want to know how many eggs and goslings the bears might eat and how this compares to the birds’ other predators, including arctic foxes, bald eagles, gulls and ravens.

Iles is also concerned with how climate change is affecting the timing of snow goose breeding seasons.

“On average, snow goose breeding is getting earlier and also getting more variable,” he says. “Other species — like the predators that eat the geese and the plants the geese eat — don’t necessarily respond to climate in the same way as the geese.”

This means the geese may be becoming “out of sync” with their plant foods, Iles says, and if so, young birds may not get enough nutritional fuel.

“Plants tend to be most nutritious right after they emerge,” he says. “Traditional thinking is goslings need to be perfectly synchronized with the emergence of plants in order to grow large enough to migrate south in the fall. If the plants don’t respond to climate change and provide needed nourishment, there could be strong effects on gosling growth and survival.”

The resultant impact of this scenario will, in turn, affect polar bears and other predators. 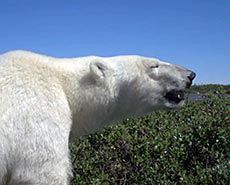 Using a remote camera, USU doctoral student and Quinney Fellow Dave Iles captured this image of a polar bear holding a snow goose egg in its teeth at Canada's Hudson Bay. His research is featured in 'The New York Times.’ 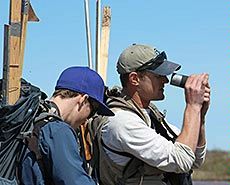 USU ecologist Dave Iles, right, uses a field candler to estimate the age of waterfowl nests along the Hudson Bay. At left is Neil Moore, an NSF Research Experience for Undergraduates grant recipient hosted by the Quinney College of Natural Resources.