Utah State University graduate student Blake Thomas is one of only five scholars in the nation to receive a competitive 2014 DEED (Demonstration of Energy and Efficiency Developments) research grant from the American Public Power Association.

The master’s student in human dimensions of ecosystem science and management in USU’s Department of Environment and Society was awarded a $4,000 grant for his proposal to explore the feasibility of geothermal power for Utah’s Logan City Light and Power. He receives an additional $1,000 in travel funds to present his findings at the APPA’s annual conference.

“I’m very excited about this opportunity to explore the feasibility of carbon dioxide-based geothermal energy for Logan,” says Thomas, who earned his bachelor’s degree from USU in environmental studies with a minor in sustainable systems in 2012. “If a viable option, it offers substantial advantages over fossil fuels and would make Logan the first community in Utah to use this source of power.

Unlike conventional geothermal power generation, carbon-dioxide-based geothermal technology uses supercritical CO2, rather than water, to produce energy. Supercritical CO2 is a fluid state of carbon dioxide, held at or above its critical temperature and pressure.

“Because geothermal power generation typically requires lots of water, it’s not always a resource-smart choice for energy — especially here in the dry West,” says Thomas, who has conducted a number of sustainability projects with ENVS faculty mentor Roslynn Brain. “The U.S. Department of Energy has invested $2 million into CO2-based geothermal technology and calls this highly transferable technology a potential ‘game-changing alternative.’”

Audiences to which Thomas will present his findings include LCL&P, Utah Gov. Gary Herbert’s energy advisor and Utah Associated Municipal Power Systems (of which LCL&P is a member.)

“The project addresses challenges of Gov. Herbert’s Strategic 10-Year Energy Plan, which notes Utah is facing rapid growth in energy demand, along with new environmental regulations, that will increase energy costs and impact the state’s ability to attract and retain new business,” Thomas says. “CO2-based geothermal could mitigate these impacts by delivering energy equal to or greater than current fossil fuel sources that would cost the same or less and be carbon-neutral.”

Another issue affecting the project is the uncertain status of Delta, Utah’s, Intermountain Power Project, which includes a coal-fired, steam electric generating station from which LCL&P receives some of its electrical power.

“IPP was set to expand, but the City of Los Angeles, the operating agent for IPP, has cancelled the expansion due to the city’s decision to become coal-free by 2025,” Thomas says. “If CO2-based geothermal is a viable option for Logan City, it may pave the way for other IPP utilities to pursue this energy source.” 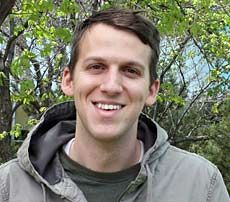 USU graduate student Blake Thomas is one of only five scholars in the nation to receive a 2014 DEED research grant from the American Public Power Association. He is exploring the feasibility of geothermal energy for Logan, Utah.