Leslie Hadfield, a 2002 graduate of Utah State University and now a doctoral student at Michigan State University, was awarded a Fulbright U.S. Student Scholarship to South Africa in modern history. She spent much of 2008 in South Africa completing her dissertation research. She has returned to Michigan State to complete her doctorate in African history.
Hadfield earned a bachelor’s in history with a minor in political science from USU. During that time she joined the Brigham Young University Field Studies program and spent a semester in South Africa. After her graduation from USU, she returned to South Africa as a student facilitator of the BYU program. That experience led her to study Steve Biko and the Black Consciousness Movement in South Africa, eventually earning a master’s in African history at Ohio University (2003-04) and providing the basis for her doctoral work at Michigan State.
“My Fulbright grant enabled me to live in South Africa and travel within the country to conduct archival research and oral history interviews about the community development programs of the Black Consciousness Movement in South Africa in the 1970s,” Hadfield said.
The Black Consciousness Movement is known through Steve Biko, a martyr of the apartheid government who is considered the father of the movement, Hadfield said. During her Fulbright study, Hadfield worked with the Steve Biko Foundation, affiliated with the University of Fort Hare.
“I lived in King William’s Town, a small town in the eastern Cape where Steve Biko grew up and lived before his death in 1977,” Hadfield said. “The area is predominantly Xhosa, a major ethnic group in South Africa, and I lived with a Xhosa family and spoke Xhosa with them and many people in the communities there.”
Hadfield said she enjoyed learning more about the Xhosa culture and language in addition to her research. She especially enjoyed their music and singing, she said.
Hadfield said she first became interested in the study of African history and the Black Consciousness Movement through classes at USU with professors Christopher Conte and Jennifer Ritterhouse in the history department and Nick Eastmond in the College of Education.
Ritterhouse, associate professor of history, said she remembers Hadfield’s intellectual development and growth at USU, especially following an undergraduate conference at the University of North Carolina at Chapel Hill. At that conference Hadfield won the “best paper” prize.
“I remember the tone of astonishment in her voice when she told me she had won the best paper prize at the conference,” Ritterhouse said. “It made me so glad that we had been able to get her there, with funding help from the Undergraduate Research Council, because she not only won a prize, but also discovered something about her intellectual and writing abilities. I think that was a genuinely new concept of herself.”
Conte was particularly helpful in advising Hadfield about graduate studies in African history, Hadfield said. She also noted the mentorship of additional history professors, some now retired, including Leonard N. Rosenband, Michael (Mick) Nicholls, F. Ross Peterson and William F. Lye.
“Leslie became a first-rate student and scholar,” Conte said. “Her powerful interest in human rights and justice, I believe, inspired her to study South Africa’s Black Consciousness Movement. She has since distinguished herself at Ohio University and Michigan State University. We in the history department are lucky to have had her as a student.”
Coincidentally, Hadfield has pursued graduate studies at the same universities where Dr. Conte received his graduate degrees.
Hadfield has now returned to Michigan State to begin writing her doctoral dissertation, with anticipated completion in May 2010. She is a native of River Heights, Utah, and graduated from Mountain Crest High School.
Related links:
History Department
College of Humanities, Arts and Social Sciences 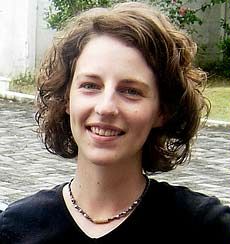 Leslie Hadfield graduated from USU in 2002 with a degree in history and is now completing her doctorate in African studies at Michigan State. 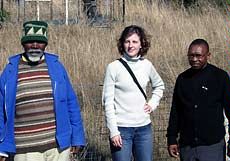