“For the first time in the university’s history, all of the candidates we submitted were accepted for awards,” says Joyce Kinkead, USU associate vice president for research. “We’re very proud of these outstanding students.”
In addition to this year’s award recipients, Utah State boasts nine Goldwater Scholars and two honorable mention recipients from previous years. The scholar award includes a two-year scholarship of up to $7,500 per year.
“This is a testament to the fantastic research mentorship provided to these students by faculty at USU,” says Mary S. Hubbard, dean of USU’s College of Science. “These awards confirm that our students are prepared to compete with the best nationwide. I applaud the accomplishments of these young scholars.”
Jeppson, a graduate of Bear River High School in Garland, Utah, is majoring in geology and physics. With faculty mentor Jim Evans, she is studying how earthquake energy is partitioned along the San Andreas Fault.
Jeppson completed a summer internship in applied geophysics at the Pacific Northwest National Laboratory in 2007. Following graduation from USU, she plans to pursue a doctorate in geophysics, conduct research and teach at the university level.
Salt Lake City native Barker-Tvedtnes was named a Goldwater Honorable Mention recipient in 2007. She is pursuing a bachelor’s degree in physics with a minor in classics.
In summer 2007, Barker-Tvedtnes attended the Polar Aeronomy Radio Science Summer School in Alaska, where she conducted research on noctilucent clouds with faculty mentor Mike Taylor. She received a 2008 Outstanding Student Award for Undergraduate Research from the National Society of Physics Students and travels to the International Conference of Physics Students in Cracow, Poland in August 2008 to present her research.
Barker-Tvedtnes plans to continue her studies at the graduate level and conduct research in upper atmospheric physics at a government or academic institution.
Chamberlin, a physics, mathematics and political science major from South Jordan, Utah, achieved the rank of cadet colonel in the Civil Air Patrol. She received the patrol’s highest honor, the General Carl A. Spaatz Award, in 2007.
While at USU, Chamberlin earned a scholarship for summer study at Germany’s Friedrich Schiller University. She plans to pursue a doctorate in mathematical physics and an academic career.
Lander, Wyo., native Cody Tramp is a sophomore majoring in molecular biology and biochemistry. The USU Undergraduate Research Fellow is pursuing four ongoing research projects. He was named a 2008 Governor’s Scholar by Gov. Jon Huntsman, Jr.
Tramp’s goals include earning a doctorate in both molecular and cellular biology. He plans to conduct research in stem cell biology and work in a national research laboratory.
USU’s 2008 honorees are among 321 award recipients selected from a field of 1,035 math, science and engineering students nominated by colleges and universities nationwide.
Previous Aggie honorees are Logan McKenna, electrical engineering; Heidi Wheelwright, physics; and Keith Warnick (Honorable Mention), physics, in 2006; Stephanie J. Chambers, biology and David Hatch, physics, in 2004; Jamie B. Jorgensen, physics, in 2002; Lara B. Anderson, physics, in 2001 and Jeff Jacobs, mechanical engineering, in 1998.
The Goldwater Scholar program was established by Congress in 1986 to foster academic excellence in science, engineering and mathematics in the nation’s universities.
Contact: Christie Fox (435) 797-3940
Writer: Mary-Ann Muffoletto (435) 797-3517
June 2008 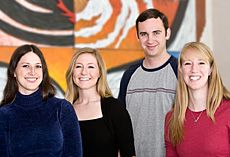