Is there a geology gene? That’s a question Utah State University geologist Susanne Janecke pondered when she learned that her grandmother pursued research interests uncannily similar to her own.
“I didn’t know until I was well into my university studies that my grandmother, Liesel Velde, shared my fascination with geology,” Janecke told family and friends who joined her Nov. 3 at the USU President’s Home for the second talk in Utah State University’ 2009-10 Inaugural Professor Lecture Series. The series, coordinated by the Provost’s Office, highlights the accomplishments of university faculty who have been promoted to full professor in the past year. In Janecke’s case, the lecture comes two years after her promotion, which occurred right before a sabbatical leave.
Displaying a copy of her grandmother’s doctoral dissertation, written in German and presented to the faculty of Germany’s Universität von Frankfurt am Main in 1920, Janecke explained that Velde studied volcanoes and spherulites — small, rounded bodies that sometimes occur in volcanic ash — in the Rhine Graben, a rift valley of Germany’s upper Rhine plain.
Janecke, who was born in Heidelberg, Germany, and immigrated as a young child with her family to Ann Arbor, Mich., notes that she was raised in an academically stimulating atmosphere. Her father was a physics professor at the University of Michigan.
“My parents would host dinner parties with their faculty friends and their guests were fascinating,” she says.
The study of geology wasn’t Janecke’s first academic pursuit. As an undergraduate, she studied archaeology at the University of Michigan but the degree program’s requirement for Greek study dampened her enthusiasm. She gravitated to geology, which led to an encounter with her future husband, USU geology professor Jim Evans, whom Janecke describes as her “mentor and best friend.”
Janecke’s research interests focus on tectonics, which, she says, allows her to study all aspects of geology. Her current projects include investigation of the San Jacinto fault zone, located about 20 miles west of California’s infamous San Andreas Fault. With colleagues, she’s determining that the fault may be younger and moving faster than earlier predictions.
“What we’re learning about this fault and its behavior is very relevant as it impacts a heavily populated area,” says Janecke, who join the faculty of USU’s Department of Geology in 1990.
Her trips to California, along with her other research projects, including investigation of large Eocene paleovalleys in Idaho and Montana, mountain valleys adjacent to Idaho’s Snake River Plain and ancient Lake Bonneville — the latter of which she is pursuing with USU Emeritus Professor Bob Oaks — have caused Janecke to hone her camping survival skills.
“With colleagues and students, I’ve braved sandstorms, snowstorms, wildfires and flash floods,” she says. “The logistics of field geology are interesting.”
Janecke has perfected the fine art of taking a field shower of which, she says, “a truck is an integral part.”
(In addition to providing privacy and a wind break, a vehicle’s rear tire makes a handy soap dish stand.)
Also integral to Janecke’s research is a range of high tech tools of which her Grandmother Velde could have only dreamt.
Today’s geologists use global positioning system technology and satellite images, she says. “Still, meticulous field work is critical for accurate study.”
Related links:
USU Department of Geology
USU College of Science
Contact: Susanne Janecke, 435-797-3877, susanne.janecke@usu.edu
Writer: Mary-Ann Muffoletto, 435-797-3517, maryann.muffoletto@usu.edu 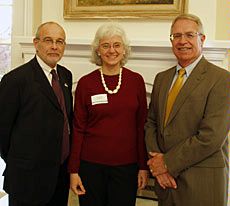 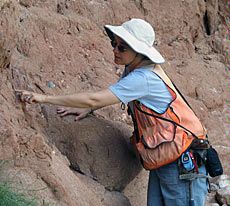