The Inaugural Professor Lecture Series at Utah State University is coordinated by the provost’s office and is hosted by President Stan Albrecht and First Lady Joyce Albrecht. Faculty members in the series have been promoted to full professor within the last academic year and present a lecture that highlights their research, creative activity or teaching at the university.
Mike Sweeney, professor and department head for the Department of Journalism and Communication, opened the series Sept. 26, with his presentation “The American War Correspondent: 1943, 2003, and Beyond.” Friends, colleagues, family members and university officials joined Sweeney for a reception and his presentation at the President’s Home.
Sweeney called the history of war correspondence — particularly as it relates to wartime censorship —his primary research area and his “academic heartbeat.”
“Nowhere do we see the press’s First Amendment role played out with such importance, or with such controversy, as during wartime,” he said. “All of America’s passions get magnified tenfold during wartime, and time seems to slow down as we follow — literally — life-and-death struggles carried out by our armed forces on our behalf.”
Sweeney drew from his rich background in this topic for the lecture. War correspondence and censorship were the topic of his doctoral dissertation at Ohio University, and for three of his books, Secrets of Victory (2001, University of North Carolina Press), From the Front (2002, National Geographic Press) and The Military and the Press (2006, Northwestern University Press).
In his lecture Sweeney emphasized “the past is not dead. Well, the past is not even past,” using a line from “Smoke,” a song by the Ben Folds Five.
“The journalism of our history informs the journalism of America’s present and future,” he said.
Today, the toothpaste is out of the tube, Sweeney continued.
“Changes in technology make it impossible for the armed forces to impose absolutely airtight censorship over ‘operational security,’ meaning a commander’s control over a battle zone. This means that wartime information controls must take the form of either preventing journalists from having access to sensitive information on the battlefield, or finding ways to draw journalists into getting ‘on the team,’ to use a famous quotation from a Vietnam War briefing.”
Today, we may miss the good old days — the days of Joe Rosenthal, Ernie Pyle and Edward R. Murrow — when classic stories and photos shaped our attitudes and opinions, Sweeney said. However, democracy is stronger and better, albeit more serious and sober, because of the fuller picture of war provided by modern correspondents using modern, speed-of-light tools, he said.
“If American citizens are to be sovereign over the nation’s actions in time of war, Americans need to make informed decisions about the conduct of war,” Sweeney said. “Therefore, broad and rich war correspondence ideally will lead to a better informed electorate and a more representative republic. The only threats to this improved dynamic of journalism are those that we as citizens choose on our own, or allow others to impose on us.”
From his Web site in the Journalism and Communication Department, we learn that Sweeney wanted to be a journalist at the age of 14. He was delivering the Washington Evening Star to student housing at the University of Maryland and Watergate was in the news.
“It was an exciting time to dream of being a reporter,” he said. “I also discovered that I like to write, and being a newspaper reporter means getting paid for writing.”
His education took him to the University of Nebraska-Lincoln for a bachelor’s degree in journalism. As a student in Nebraska he worked as a sports information assistant and as a photographer in the Nebraska Press Association.
During his Inaugural Lecture presentation, Sweeney commented on reading the work of World War II correspondent Ernie Pyle. As an undergraduate at the University of Nebraska, that experience helped lead Sweeney to a career in professional journalism and later served as the start of his publication record and an academic career as a journalism historian.
Following graduation, he worked as an education, police and general assignments reporter for the Springfield (Mo.) Daily News. Following a move to Texas, he worked 12 years at the Fort Worth Star-Telegram.
Along the way Sweeney earned a master’s degree at the University of North Texas to broaden his career opportunities and to spend more time with his family. He earned his doctorate in 1996, the same year he joined the faculty at USU.
“As much as I liked the thrills of working in daily journalism — the joy of crafting a good story, the rush of making deadline, the immediate gratification of seeing work in print — I find deeper satisfaction in working with university students,” Sweeney said. “So many of them want to learn so much, so fast, so deeply. Helping them toward their life goals is a less tangible reward, but more fulfilling. … By becoming a teacher, I am doing my small part to influence the audience that is most important to the future of journalism; tomorrow’s journalists.”
Writer: Patrick Williams (435) 797-1354, patrick.williams@usu.edu
Contact: Michael Sweeney (435) 797-3213, mike.sweeney@usu.edu 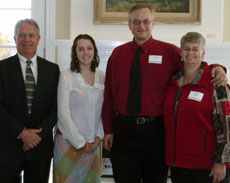 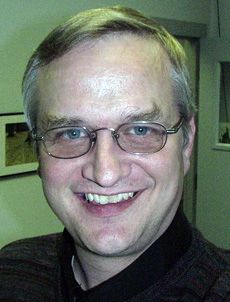 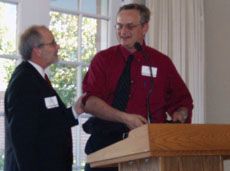 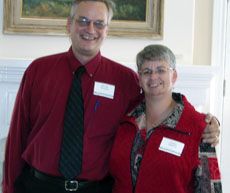 Mike Sweeney thanked his wife, Carolyn, who is trained in technical editing. He said she is his best editor and supporter.