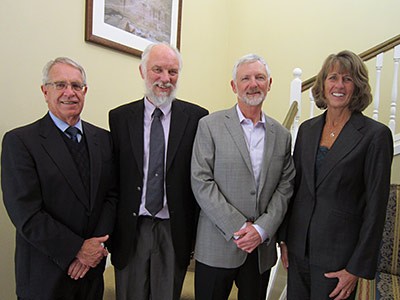 Among the first books Utah State University wildlife biologist Eric Gese acquired for his personal library, at the ripe old age of 11, was The Voice of the Coyote by Texan folklorist J. Frank Dobie.

“You can see where I wrote my name in the front,” says Gese, as he lifts the book from his office shelf, opens the front cover and displays his adolescent scrawl.

A few years later, he added the L. David Mech classic The Wolf. Mech, a renowned wolf scholar and senior scientist for the U.S. Geological Survey’s Biological Resources Division, would, incidentally, become a mentor to the aspiring scientist.

Gese, who joined USU in 1995, grew up camping, fishing, hunting and backpacking with his family, who moved frequently around the American Southwest during his childhood. His grandmother, he says, hunted deer well into her senior years.

“So it seems I was destined to become a wildlife biologist,” says Gese, who shared his professional journey with family and friends Jan. 26 at the USU President’s Home. His presentation, “1 to 100 kg: 30 Years of Chasing Dogs and Cats,” was the 10th talk in the university’s 2014-15 Inaugural Professor Lecture Series. Coordinated by the Provost’s Office, the series highlights the accomplishments of faculty who have been promoted to full professor in the past year.

Following high school graduation in Phoenix, Gese enrolled in the University of Texas at San Antonio, where he earned a bachelor’s degree in biology. From there, he headed to Ely, Minn., to work with Mech as a wildlife technician on the Minnesota Wolf Project. Mech recommended him to researcher Orrin Rongstad of the University of Wisconsin-Madison, who was seeking grad students with wildlife skills.

“My outdoors experience paid off,” he says. “Dr. Rongstad needed someone who could trap and handle coyotes and he hired me as a master’s student for a coyote project in Colorado.”

With a team of other grad students, Gese spent two years gathering baseline data on wildlife at the Pinon Canyon Maneuver Site near Trinidad, Colo., for a U.S. Army-funded study.

“We were studying potential impacts on wildlife at an area planned for the new maneuver site for armored cavalry,” he says.  “Once the army showed up, they showed up alright: with 400 tanks and 1,500 soldiers.”

Gese would continue with the project for seven years, before returning to Minnesota to resume study of wolves with Mech.

“We attempted to measure physiological mechanisms related to the animals’ dispersal, but the technology was not available to do what we needed it to do,” he says.

Not able to acquire enough animals for a meaningful study, Gese turned to study of coyote behavior in Yellowstone National Park for his doctoral dissertation from the University of Wisconsin under the supervision of USU alum Bob Ruff.

In subsequent years, he’s continued to study coyotes, wolves, foxes and other predators as a research wildlife biologist with the USDA National Wildlife Research Center Predator Behavior and Ecology field station in Millville, Utah, and as a faculty member in USU’s Department of Wildland Resources and USU Ecology Center.

Armed with increasingly sophisticated technology, including radio collars and GPS, Gese and his students have studied the behavior, ecology and management of predators throughout North America, and participated in ground-breaking research on jaguars and pumas in Brazil.

“I feel very fortunate to have had the opportunities to pursue the work I love,” he says.

Gese is featured speaker Friday, Feb. 6, at USU’s Swaner EcoCenter in Park City, Utah, during the center’s special exhibition Mountain Lion! The Story of Pumas and People, which runs through March 31, 2015. He presents “Phantom of the Night: The Jaguars of Brazil,” at 7 p.m. For reservations, contact the Swaner EcoCenter at 435-649-1767. 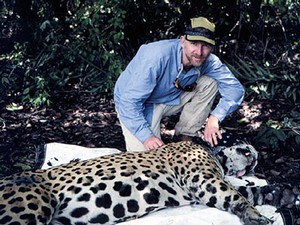 Gese, pictured with a tranquilized jaguar in Brazil, was part of a ground-breaking study of the large cats in the Pantanal wetlands. He speaks about the project Feb. 6 at USU's Swaner EcoCenter in Park City, Utah. 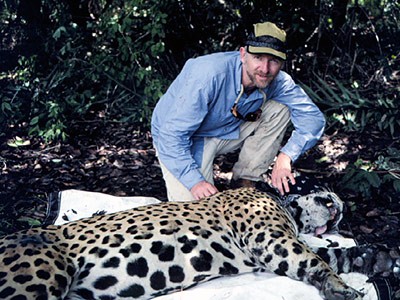