Helga Van Miegroet, a soil scientist, silviculturist and biogeochemist at Utah State University, says she left her native Belgium in the 1970s at age 23 to pursue graduate studies in the United States “with two suitcases and a great bundle of naiveté.”
“It took some time for me to get used to the American system of higher education and become an active learner,” Van Miegroet told family and friends who joined her March 25 at the USU President’s Home for the tenth and final talk in the university’s 2009-10 Inaugural Professor Lecture Series.
The series, coordinated by the Provost’s Office and hosted by President Stan Albrecht and First Lady Joyce Albrecht, highlights the accomplishments of faculty who have been promoted to full professor in the past year. In Van Miegroet’s case, the lecture comes two years after her promotion, which occurred right before a year-long sabbatical leave to Europe.
Van Miegroet, who holds dual faculty appointments in the College of Natural Resources’ Department of Watershed Sciences and Department of Wildland Resources, says her graduate school years at the University of Washington gave her a solid grounding in the scientific method and challenged her to develop her own ideas and explore knowledge beyond accepted boundaries.
“My graduate school mentor forced me out of my protective shell,” says Van Miegroet, who joined USU in 1993. “He told me, ‘You’re entitled to your own vision if you can defend it.’”
His words echoed those of Van Miegroet’s father, who encouraged his daughter to arm herself with facts, not solely emotion, to make a difference during the 1970s’ budding environmental movement.
Van Miegroet’s passion for biophysical sciences was somewhat surprising — even to her — she says, as she declared during her undergrad years at the State University of Ghent that she despised chemistry and soil science and would never study them again. But after landing in the Pacific Northwest, a world center of forestry production, and delving (literally) into the properties of soil and tree growth, she found herself fascinated with below-ground ecosystem processes.
“I realized that I wasn’t just looking at a tree — but a tree sitting in a living medium and part of a whole system,” she says. “Working with my advisor instilled in me the excitement of looking at nature as a big jigsaw puzzle. I was unraveling a piece of the story of a greater mechanistic process and getting excited by the pursuit of unanswered questions.”
After earning her doctorate from UW in 1986, Van Miegroet joined the Department of Energy’s Oak Ridge National Laboratory in Tennessee, where she became involved in studies of atmospheric deposition and its potential impacts on forests.
“In 1980, Congress mandated a comprehensive study to assess the possible environmental impacts of atmospheric deposition or ‘acid rain,’” she says. “About a decade later, interest in ‘climate change’ emerged and, almost overnight, the focus of environmental research changed.”
From that experience, Van Miegroet says she learned how science influences the political process “and vice versa.”
After Oak Ridge, Van Miegroet chose to add teaching to her professional goals and decided to return to the American West. Her quest led her to USU.
“I inherently knew that I was a good teacher and I wanted to do for others what my teachers had done for me,” she says.
Others apparently agree, as Van Miegroet received USU’s Outstanding Faculty Employee Award in 2007. She was named the College of Natural Resources Outstanding Undergraduate Research Mentor in 2004 and received USU’s prestigious Robins Award as Faculty Advisor of the Year in 1996.
Van Miegroet’s current research, which she conducts with collaborators in the United States and in Europe, focuses on carbon storage in soils. In her research activities, she enlists both graduate and undergraduate students.
“I believe it’s tremendously powerful for a young person to be involved in collaborative scientific research,” she says. “I want to give students the opportunity to push their limits — just as I had these opportunities.”
Related links:
Contact: Helga Van Miegroet, 435-797-3175, helga.vanmiegroet@usu.edu
Writer: Mary-Ann Muffoletto, 435-797-3517, maryann.muffoletto@usu.edu 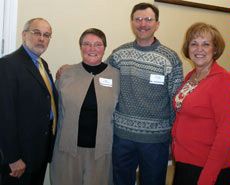 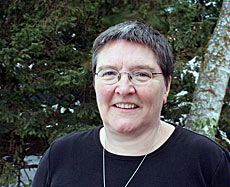