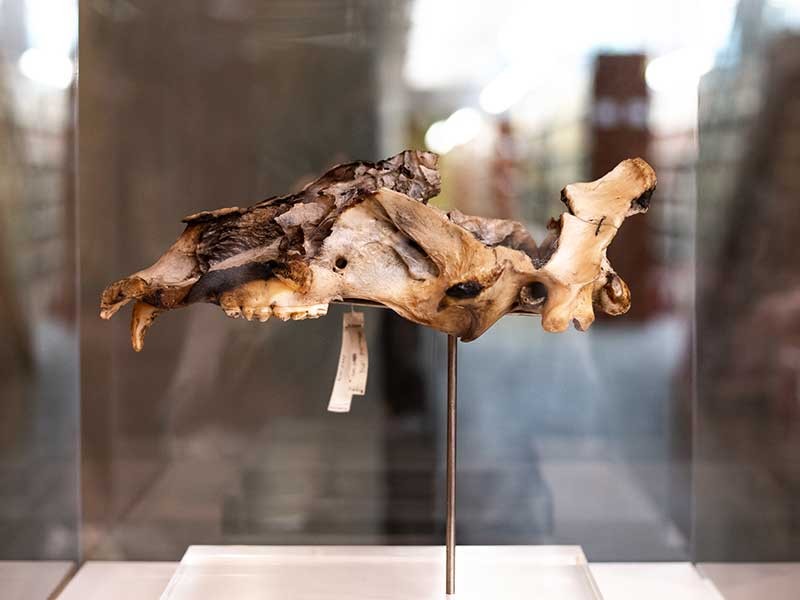 If you have been to Utah State University Libraries’ Special Collections and Archives, you may have missed the skull of Old Ephraim, a local legend. The display is unremarkable -- a small case with a bed of black velvet to cradle the slightly charred and broken cranium of a bear that terrorized livestock almost one hundred years ago.

USU Libraries changed that. Old Ephraim’s skull has a new home that sits next to a life-size cutout of the bear with a display that depicts the epic tale of man versus grizzly bear.

While the physical exhibit is informative, it wasn’t enough on its own. Manuscript Curator Clint Pumphrey and student worker Alyson Griggs also put together a digital exhibit to honor the bear.

“We aren’t a museum and we aren’t really equipped to have artifacts displayed,” Pumphrey said. “But we wanted to make sure that we did something really special for Old Ephraim.”

Old Ephraim was accused of killing sheep in northern Utah during the early twentieth century. In 1922 (or 1923, depending on who you ask), local sheep herder Frank Clark hunted the grizzly down, shooting him an estimated ten times. Old Ephraim was one of the last grizzly bears in Utah.

“Researching Old Ephraim has been very unique and enjoyable for me,” Griggs said. “The story of Old Ephraim is not only about man’s triumph over beast, it is also tragic because the beast, who was one of the last of his kind, is dead.”

Clark burned and buried Old Ephraim and told Boy Scouts the tale. The Scouts dug up the skull and sold it to the Smithsonian in Washington D.C. for $25.

“We have a lot of people think Old Ephraim’s skull is still at the Smithsonian, but it came to Special Collections in 1978 after Senator Orrin Hatch lobbied for his return,” Pumphrey said. “He’s been here ever since.”

In addition to the exhibits, Special Collections and Archives is encouraging people to visit with a giveaway. The winner will get a customized stuffed grizzly bear. To enter, one must visit the display and post a picture on Instagram with the hashtag #ExperienceEphraim.