In an agreement called transformative, Utah State University Libraries has joined the HathiTrust, a shared digital repository that more than doubles the available books in USU’s collection.
“With the scope and range of HathiTrust, a national digital library is coming into being and Utah State University is among the first ranks in that effort,” said Rick Clement, dean of libraries at USU. “This is an exciting development, not only for the main campus but for the five other campuses in the USU system and for our distance education students.”
Utah State University signed a partnership agreement with HathiTrust, becoming the 35th school in the country to become a partner institution. The previous three partners to join HathiTrust are Cornell, Dartmouth, and the Triangle Research Libraries Network (including Duke, North Carolina at Chapel Hill, North Carolina Central and North Carolina State).
“Utah State University now has a seat at the table at this important enterprise,” Clement said. “We join important and diverse partners, including Google, Microsoft and the Internet Archive.”
HathiTrust is a partnership of major academic and research libraries collaborating in a digital library initiative to preserve and provide access to the published record in digital form. It was launched in 2008 and has a growing membership of visionary schools.
Utah State University is the first university in the state of Utah and the region to become a partner member of HathiTrust.
“Utah State brings a unique perspective to the HathiTrust,” said John Wilkin, executive director of HathiTrust. “Our collection will be enhanced by the hundreds of open access titles that USU Press will deposit, and we welcome their contribution to digital preservation and services as a sustaining partner.”
HathiTrust was originally conceived as a collaboration of the 13 universities of the Committee on Institutional Cooperation (the Big Ten schools) and the University of California system to establish a repository for the universities to archive and share their digitized collections.
As the 35th partner school, Utah State University has access to 1.6 million electronic, or digitized, items in the public domain. For comparison, on-site, USU has the same number of books in the Merrill-Cazier Library collection.
“This doubles the number of books in our collection,” Clement said. “For a university like Utah State University, this is such a good fit.”
The move is not only a valuable resource for students and faculty at the Logan campus, but at the five other campuses and distance education sites throughout the state.
“The access this provides is invaluable for our students,” Clement said. “The library is being used more, but not always by students coming through the door. Library usage is up but there is more and more available in the electronic world. The resources made available through HathiTrust can be tapped via our library website by students throughout the USU system.”
Over the past two years, HathiTrust member schools have contributed more than 7 million volumes to the digital library, digitized from their library collections through a number of means, including Google and Internet Archive digitization and in-house initiatives. Of that 7 million, more than 1.6 million of the contributed volumes are in the public domain and are freely available on the Web.
An advantage of being a partner school is that students and faculty at USU can both view and print all or a portion of each available book. Non-member schools can view the items but cannot produce printed copies. And while a book from the stacks of the Merrill-Cazier Library can only be used by one individual at a time, the digital volumes in HathiTrust can be viewed and used by an infinite number at the same time.
HathiTrust serves a dual role. First, as a trusted repository it guarantees the long-term preservation of the materials it holds, providing the expert curation and consistent access long associated with research libraries. Second, as a service for partners and a public good, HathiTrust offers persistent access to the digital collections. This includes viewing, downloading and searching access to public domain volumes and searching access to copyright volumes.
USU’s road to joining HathiTrust began with a partnership with Indiana University, Clement said. Indiana, among the founding schools of HathiTrust, has digitized its folklore collection creating an Open Folklore website.
“Indiana and USU are considered among the top folklore programs in the country,” Clement said. “We’re digitizing a great deal of our folklore archive, and Indiana was interested in making available the folklore books published by USU Press. Indiana’s request for this material morphed into our full partner association with HathiTrust.”
USU Libraries’ effort to join HathiTrust was supported by two important offices on campus.
“Executive Vice President and Provost Raymond Coward and the Vice President for Research Brent Miller have been extremely supportive in this move,” Clement said. “USU Libraries appreciates their support and effort in this endeavor. When the partnership agreement was announced, President Albrecht was highly enthused.
“Our partnership with the HathiTrust will bring an ever-growing number of digital books to our students, faculty and staff,” Clement said. “While we continue to value traditional books, we also understand that the HathiTrust is the future for providing access to our multi-campus system and our many distance-education students. It is truly transformational.”
Related links:
HathiTrust
USU’s University Libraries
Writer: Patrick Williams, 435-797-1354, patrick.williams@usu.edu
Contact: Richard Clement, Dean of Libraries, (435) 797-2631, Richard.Clement@usu.edu 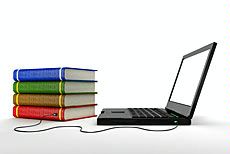 University Libraries at Utah State University became a partner member of HathiTrust, an innovative and rapidly growing digital library. USU was the first university in the state to join the trust.