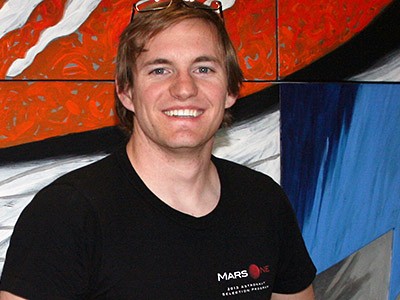 USU undergraduate geology major Cody Don Reeder is among 100 finalists selected for the Dutch, non-profit Mars One mission to establish a permanent human settlement on the Red Planet.

Utah State University undergraduate Cody Don Reeder had to turn off the ringtone on his cell phone.

“It kept going off during class,” says the 22-year-old geology major. “I started getting a lot of media attention. At one point, I was getting email messages about every five minutes.”

Reeder is among 100 finalists, culled from more than 200,000 hopefuls, selected to colonize Earth’s red-hued planetary neighbor through the Mars One mission. Based in Amerfoort, The Netherlands, Mars One, a non-profit foundation bent on establishing a permanent human settlement on Mars, announced the latest cut Feb. 16, 2015.

Reeder learned about Mars One from his roommate in 2013 and jumped at the chance to apply.

“I can’t remember when I wasn’t interested in space,” says Reeder, who grew up on his family’s ranch in the Stansbury Mountains about 10 miles west of Grantsville, Utah. “When I was about five-years-old, I remember my grandmother pointing out Comet Hale-Bopp to me in the night sky. I was mesmerized.”

The 2001 graduate of Grantsville High reasons he’s an excellent candidate for the pioneering trek, having “grown up off the grid in Utah’s West Desert.”

In his mission application video, the avid beekeeper, while hanging upside down, boasts he can “make or fix just about anything — even things that are not considered fixable.”

He also hauls his own water, generates 100 percent of his own electricity and, oh, the bees.

“If you have ever had to pollinate a large greenhouse, you know you’re going to need bees,” Reeder says.

How do his family and friends feel about the young man inching closer and closer to a never-to-return journey?

“They have mixed feelings about it,” Reeder says. “They would love to see me go because they know it’s my dream, but they don’t want me to leave.”

Indeed, the mission is a one-way trip; a big decision for a young adult. His goal has definitely affected his dating life.

“After I applied for the mission, some girls didn’t even want to go out with me,” Reeder says. “But I have a girlfriend, now. She knew about my plan and she knows it’s what I really want to do.”

For now, the student will continue to work on his geology degree.

“I love rocks,” says Reeder, who began his collegiate career at Westminster College and later transferred to USU. “I started out in chemistry and then physics. Then I decided to major in geology, which combines chemistry and physics.”

Utah State’s large classes are no deterrent to the young scientist.

“I don’t mind 300-person classes,” Reeder says. “I sit on the first row and don’t hesitate to ask questions of the professor. I think a big school is actually a bonus.”

In the next round of Mars One competition beginning this fall, Reeder will need to prove his mettle during a series of survival and team-building challenges. The candidate pool will ultimately be narrowed to six groups of four, who will become full-time employees of the Mars One Astronaut Corps and began mission training.

“It would be an amazing experience,” he says. “I’m staying focused on the goal of becoming a Mars One astronaut.” 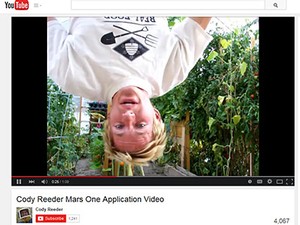 In this screen capture from his application video to Mars One, Reeder, by hanging upside down in a green house, demonstrates his adaptability to the rigors of space flight while explaining the benefits of his beekeeping skills for Mars colonization. 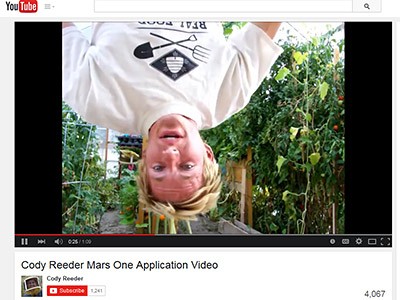