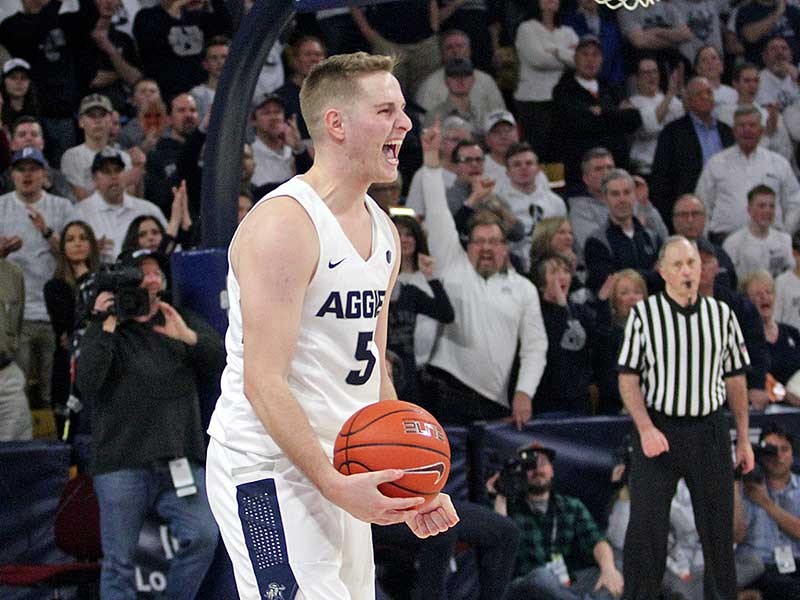 USU junior guard Sam Merrill was named the Mountain West Player of the Year, along with being named first-team all-Mountain West.

Merrill is the first Aggie to average more than 20 points in a season since Jaycee Carroll averaged 22.4 points per game as a senior during the 2007-08 campaign. Merrill is the seventh player in Utah State history to be named the conference player of the year, joining Dean Hunger (Big West, 1980), Greg Grant (Big West, 1986), Eric Franson (Big West, 1995), Carroll (WAC, 2008), Gary Wilkinson (WAC, 2009) and Tai Wesley (WAC, 2011). Merrill is one of only two juniors in Utah State history to earn the award as Franson was also a junior during the 1994-95 season. Additionally, Merrill is one of just 10 non-seniors to be named Mountain West Player of the Year in league history.

Freshman center Neemias Queta was named the Freshman and Defensive Player of the Year after anchoring a Utah State defense that ranks 10th in the nation in field goal percentage defense (.392) and third in the nation in 2-point field goal percentage defense (.417). Queta rewrote the USU single-season block record this season with his 73 total blocks, speeding past the previous record of 59 set during the 2000-01 season by Shawn Daniels. Queta is the sixth Aggie to be named the conference freshman of the year, joining Greg Grant (Big West, 1983), Kendall Youngblood (Big West, 1989), Bryon Ruffner (Big West, 1991), Jaycee Carroll (Big West, 2005) and Koby McEwen (Mountain West, 2017). Queta is only the second player in school history to be named the conference defensive player of the year, joining Daniels, who was named the Big West Defensive Player of the Year in 2001.

Queta recorded a MW-freshman record six blocks against Fresno State on Jan. 9, also marking the third-most blocks in a single game in school history and the most by an Aggie since the 2007-08 season. Queta is the second Aggie in the last three years to earn Mountain West Freshman of the Year, joining McEwen, who earned the award during the 2016-17 season.