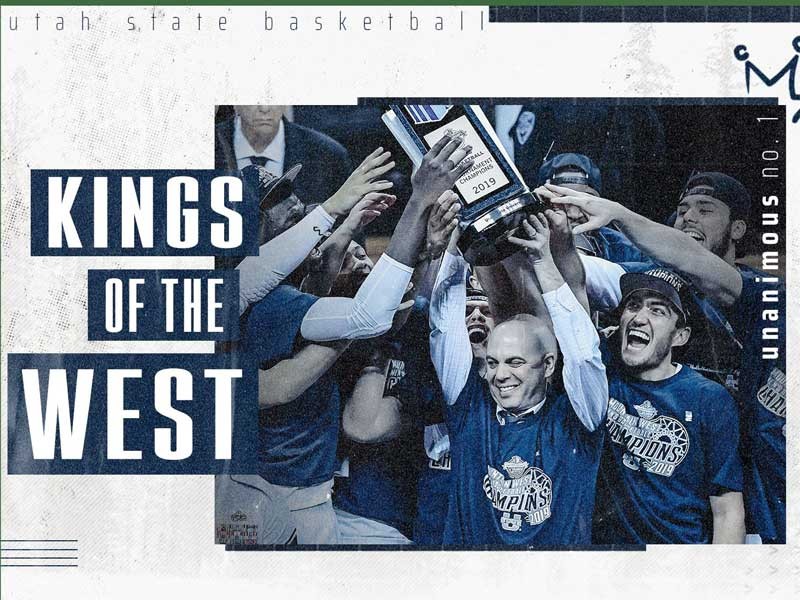 Utah State men's basketball is a unanimous pick to win the Mountain West for the 2019-20 season, as voted upon by the media and announced by the league on Tuesday. The unanimous pick is the first time a team has ever garnered every first-place vote in conference history.

"The Mountain West has a rich tradition of excellence in men's basketball," second-year head men's basketball coach Craig Smith said. "It is humbling to be the first MW program to be unanimously ranked as the preseason favorites to win the MW championship.

"That being said," he continued. "We aren't really into polls and rankings in our program. This team hasn't proven anything and our goal is to be on top of the MW at the end of the year."

Utah State enters the 2019-20 season with a great deal of expectations after capturing both the MW regular season and tournament titles a season ago. The Aggies return six letterwinners and four starters, including MW Preseason Player of the Year Sam Merrill and preseason all-league selection Neemias Queta. They are joined by sophomore guard Brock Miller, who started in every game last season, and junior guard Abel Porter, who started at the point in each of the final 17 games last season and led the Aggies to a 15-2 record over that stretch.

The Aggies also benefit in the return of senior guard Diogo Brito, one of only three players returning in the Mountain West that played in more than 30 games last season and averaged more than 8.0 points, 4.0 rebounds, 2.0 assists and 1.0 steals per game. Sophomore forward Justin Bean rounds out the returners for the Aggies, saving one of his top performances of the year for the opening round of the MW Tournament a season ago after finishing with his first career double-double of 14 points and 15 rebounds against New Mexico.

They are complemented by three returning redshirts in senior forward Roche Grootfaam, junior center Klay Stall and freshman center Trevin Dorius. Grootfaam and Stall were both in the program last year, but were rehabbing injuries, while Dorius was with the Aggies during the 2015-16 season and recently returned from a two-year LDS Mission in Arizona.

Utah State hosts The College of Idaho in an exhibition contest on Wednesday, Oct. 30, before welcoming Montana State to the Dee Glen Smith Spectrum on Tuesday, Nov. 5, for the home opener at 8 p.m.