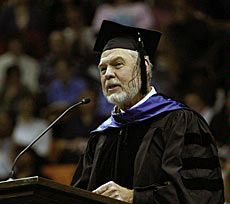 Merlin Olsen was honored at USU in 2005 with an honorary degree. 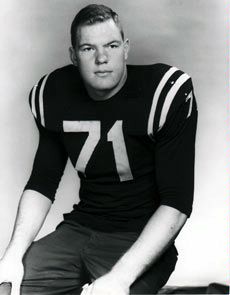 Olsen was a three-year letterman on the offensive and defensive lines for Utah State's football team 1959-61, earning All-American honors during both his junior and senior seasons. 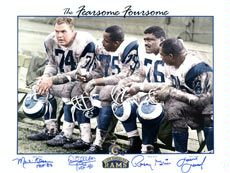 Merlin Olsen became a charter member of the Los Angeles Rams and the famed "Fearsome Foursome." 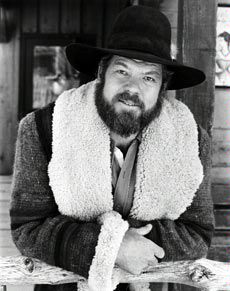 Following his football career, Merlin Olsen had a successful career as an actor and is remembered for several popular television series.

Sent by Dorrie Barnes on Friday, March 12 - 4:21PM
Reading this, I have a tear going down my cheek. What a wonderful man. Looks like God needs him to help "on the other side."

Sent by Robert Kendall on Friday, March 12 - 4:45PM
As a kid growing up in the 70's, I always admired Merlin Olsen. For a man that did so many things well (football, acting, broadcasting) he appeared very humble. He was a soft-spoken man than appeared like the ideal father figure. He was a great example for all men to follow. He will be missed.

Sent by John Beckmeyer on Friday, March 12 - 4:46PM
As a 1980 USU graduate it was with great sadness to learn of the passing of Merlin Olsen. As a long time resident of Park City, it was always an honor to chat with fellow alum Merlin Olsen at the Post Office. He was a great man.

Sent by james williams on Friday, March 12 - 4:47PM
Went too Logan High with Merlin. Knew him well while growing up in Logan, Utah. When and where will his funeal be?

Sent by Elwyn Peterson on Friday, March 12 - 4:47PM
I missed watching him play at USU by one year, but my landlord during my years in Logan owned a construction company and had hired Merlin Olson during the summer. I recall him describing his special 'work crew math' during those years; if a job required a 5-man crew he would send three guys... and Merlin. Sad day, but cushioned with with some pride of being a fellow USU alumnus.

Sent by Jeff Alkire on Tuesday, March 16 - 5:30PM
Simply the greatest Aggie Athlete ever! Also, the greatest Athlete to come out of the state of Utah. I only wish he could have been with us long enough to see the field named after him, he deserved to see that honor. Prayers are with his family and friends, god bless Merlin Olsen!