Utah State University graduate student Jeffrey Hazboun is just as comfortable recounting a day of executing “sweet boofs” and navigating “pushy rapids” as he is discussing the nuances of general relativity and quantum theory or the reproduction rates of desert tortoises and the life history of Gila monsters.
The seasoned wildlife biologist, who is pursuing a doctorate in theoretical physics, is among a team of intrepid kayakers exploring the rivers of Siberia’s Kamchatka Peninsula. Hazboun serves as science coordinator for The Kamchatka Project, a grassroots effort to explore critical salmon habitat in remote rivers of the peninsula, communicate information about the area to a broad audience and seek multi-partnered conservation solutions.
“Not only are we interested in finding new stretches of whitewater, we want to bring back a sense of this unique place and the troubles it’s facing,” Hazboun says. “Kamchatka is a pristine area with few roads and dams, but the salmon population faces growing pressures, specifically from poaching.”
Extending roughly north-south from Russia’s Far East, the 777-mile-long peninsula is bordered by the Pacific Ocean on the east and the Sea of Okhotsk on the west. Teeming with some of the world’s densest populations of salmon and brown bear, the peninsula is also home to more than 160 volcanoes, many of them active.
The group’s expedition, which began June 30 and continues through July 29, is funded by a number of sponsors, including the National Geographic Society. Last February, the team received a grant from the society’s Expeditions Council and is filming the trip for an episode of the National Geographic Channel’s “Monster Fish” television program.
Along with kayaking never-run stretches of the region’s rivers, Hazboun is collecting various scientific measurements and recording observations. Among the team’s objectives, he says, is to collaborate with scientists and contribute to the body of ecological and hydrological knowledge of the peninsula.
The USU community is invited to follow the team’s adventure on Facebook and the project’s website.
Related links:
USU Department of Physics
USU College of Science
Contact: Jeffrey Hazboun, jeffrey.hazboun@gmail.com
Writer: Mary-Ann Muffoletto, 435-797-3517, maryann.muffoletto@usu.edu 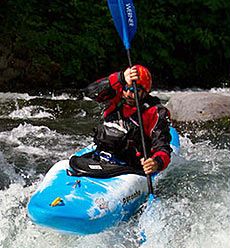 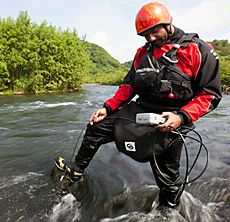