Utah State University’s Department of Physics is among the first four universities in the nation honored with a new national award recognizing excellence in preparing physics students for successful graduate study and careers.

USU received an inaugural 2012 Improving Undergraduate Physics Education Award from the American Physical Society’s Committee on Education. Department Head Jan Sojka accepted the award on behalf of the department at an April 2 ceremony during the APS annual meeting in Atlanta.

“The selection committee was particularly impressed with Utah State University’s efforts in attracting physics majors and in preparing a substantial number of physics teachers,” said Noah Finkelstein, chair of the APR Committee on Education. “USU’s outreach efforts are without parallel. It is a distinctive honor that Utah State is among the first departments earning this prestigious award.”

During the past 12 years, the physics department has systematically improved its undergraduate program with such efforts as hiring a full-time, professional advisor, updating laboratory facilities, instituting undergraduate research as a degree requirement, re-invigorating its Society of Physics Students chapter and initiating a “scholarship boot camp” to prepare high-performing students to compete for national awards.

“In exit interviews, our seniors repeatedly laud advisor Karalee Ransom, along with our other staff and faculty for their attentive guidance,” Sojka says.

The Physics Department hosts the annual USU Physics Day at Lagoon, one of USU’s longest standing and most enthusiastically received outreach and recruitment events. Since its inception in 1990, the spring gathering has welcomed nearly 120,000 aspiring scientists from throughout the Intermountain West for a day of wacky science fun and introduction to undergraduate physics.

For the sixth year in a row, USU’s Society of Physics Students Chapter has been designated an “Outstanding Chapter” by the society’s national office. The student-led chapter maintains a busy outreach schedule, providing on-site demonstrations to K-12 students. Among the chapter’s most celebrated activities was the “20,000 Bouncy Ball Helicopter Drop” in March 2011 that garnered international media attention.

In recent years, the student chapter received one of 20 LaserFest Outreach Grants administered collaboratively by the American Physical Society, the Optical Society, the Society of Photo-optical Instrumentation Engineers and the IEEE Photonics Society, in celebration of the 50th anniversary of the laser. The chapter also received a Marsh W. White Outreach Award from the Society of Physics Students, as well as an Undergraduate Research Award from Sigma Pi Sigma, the national physics honor society.

USU’s Physics Department also coordinates the university’s famous Get Away Special “GAS” Team, which is largely responsible for one of Utah State’s most well known achievements: Utah State has sent more student-built experiments into space than any other university in the world. The team conducted successful experiments aboard NASA’s microgravity “vomit comet” aircrafts in 2011 and 2010 and is currently working on a cube satellite project.

In addition to student accolades, two physics professors, Sojka and David Peak, are among USU’s 11 Carnegie Utah Professors of the Year.

Other universities receiving the inaugural APS award were University of California, Berkeley; Mount Holyoke College and University of Illinois at Urbana-Champaign. 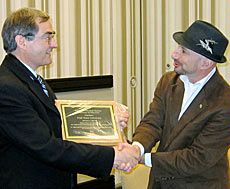 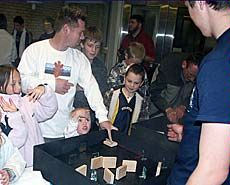