Randy Jones, professor in the department of Family, Consumer, and Human Development, presented conclusions from his research on identity statuses and adolescent behavior in his Nov. 2 inaugural professor lecture.
The Inaugural Professor Lecture Series at Utah State University is coordinated by the provost’s office and is hosted by President Stan Albrecht and First Lady Joyce Albrecht. Faculty members in the series have been promoted to full professor within the last academic year and present a lecture that highlights their research, creative activity or teaching at the university.
Jones’s research focuses on personal identity status and its correlation with behavior, particularly in adolescents.
Personal identity status theory consists of four identity statuses, each distinguished by whether or not the person has consciously explored their own identity and whether or not they have a commitment to their own identity, or individuality, Jones said.
In his presentation Jones explained how the four identity statuses are correlated with the likelihood of drug and alcohol use in adolescents.
Using charts derived from more than 20 years of research, Jones illustrated that adolescents who have not consciously explored, but have a commitment to their own identity, are less likely to use drugs and alcohol. Conversely, students who have neither explored their personal identity, nor are committed to it, are more likely to use drugs and alcohol.
Jones continued by explaining how he was compelled to take this research even further. “I realized existing research had not examined adolescent identity within an environmental context,” Jones said.
Jones demonstrated the concept of identity within an environmental context by relating it to the shootings at Columbine High School in 1999.
“Videotapes of shooter Eric Harris’s bedroom showed bookshelves full of bombs, guns, ammunition and knives,” Jones said. “Possessions are behavioral residue; they reflect aspects of our identity. Behavioral artifacts are abundant in our material acquisitions. Material acquisitions reveal beliefs, values, attitudes and goals. Beliefs, values, attitudes and goals are important components of identity.”
Jones demonstrated this statement with charts resulting from surveys conducted with more than 200 high school students and then correlated these results with displayed photos of some of the student’s bedrooms.
“There was a clear link between what the students said their values and goals were and what they had displayed in their bedrooms,” said Jones. “Identity is a summation of every experience we’ve had.”
Jones concluded by pointing out that every person attending the presentation has had an effect on his identity, particularly his professional identity.
Throughout his lecture Jones referred to the graduate students he has worked with and acknowledged the impact they have had on his research. Many graduate students from Utah State and other universities have made substantial contributions to the research on identity through data collection, organization and interpretation, Jones said.
Jones began his research on identity statuses when he went to work for the Navy Substance Abuse Prevention program after completing his doctorate at the University of Arizona. He continued his research in several Arizona schools until it was incorporated into drug prevention programs in schools statewide by the Arizona Department of Education in 1986.
In the future Jones plans to research whether or not aspects of adolescent environments are predictors of risky or health-compromising behavior, health-enhancing behavior and educational aspirations and academic achievement. He also plans to research whether changes in adolescent environment correspond with changes in identity status.
Jones received his bachelor’s degree in psychology and his master’s degree in family and human development from Utah State University prior to earning his doctorate in educational psychology.
Contact: Randy Jones 797-1553
Writer: Leisa Meadows 770-5432 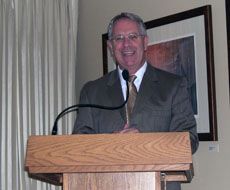 President Stan Albrecht spoke during the reception that honored Randall Jones for his promotion to full professor in the Family Consumer and Human Development Department. 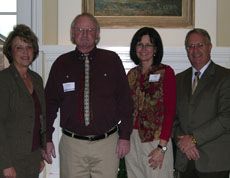 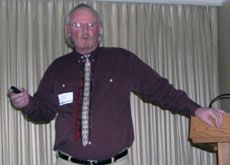 Professor Jones during his presentation.