Utah State University professor of English Phebe Jensen presented her Inaugural Professor Lecture March 24 in a presentation titled “Shakespeare’s Clocks and Calendars.”
Jensen graduated with a bachelor’s from Middlebury in 1981 and lived in Brooklyn for two years, where she worked as an editorial assistant to a documentary filmmaker, at The New Yorker. In the summer of 1983, she went to the Bread Loaf School of English in Oxford for a summer master’s in English program, where she met her husband, Paul. In the summer of 1986 she and Paul were married and she graduated with master’s degrees in English from Bread Loaf. In 1987 they entered the doctoral program at UNC-Chapel Hill.
Joining the Department of English, Jensen began her career at USU in 1995, and has since become one of a group of scholars reconsidering the role of Catholicism in sixteenth century Protestant English culture. She has published articles on that subject in Shakespeare Quarterly, Literature and History, Reformation, Criticism and several essay collections and has been a plenary speaker at conferences at the Clark Library of UCLA and Louisiana State University.
Jensen has also been the recipient of a Folger Shakespeare Library short-term fellowship, which she took in 2006 while finishing her first book, Religion and Revelry in Shakespeare’s Festive World, published by Cambridge University Press in 2008. She has since completed two articles now forthcoming, one on Christmas carols at the Reformation, and another on a cache of Anglo-Saxon coins found in 1609 on the site of a Catholic graveyard in Lancaster.
Jensen has been on sabbatical since August 2009, working on a second book project currently titled Shakespeare’s Seasons, the subject of her inaugural lecture.
The Inaugural Professor Lecture Series is coordinated by the provost’s office and is hosted by President Stan Albrecht and First Lady Joyce Albrecht. Faculty members in the series have been promoted to full professor within the last academic year and present a lecture that highlights their research, creative activity or teaching at the university.
Writer/Contact: Sarah Reale, (435)797-2759, sarah.reale@usu.edu 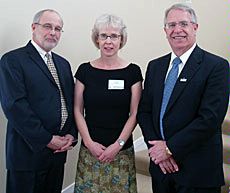