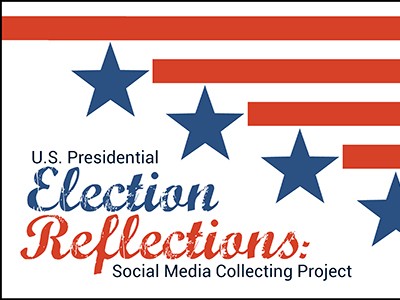 Just in time for the United States presidential inauguration, Utah State University Library launches the Election Reflections Collection, a social media collecting project. The collection boasts 233 reflections about the 2016 presidential election results. The collection project began the day after the election and ran for one month. The respondents are from 27 U.S. states and four foreign countries.

“The social media collecting project is a first for the USU Library,” Williams said. “The day after the election we watched as social media blew up with personal reflections on the election results. We knew it was important that we collect and preserve these reflections, and fast.”

Using social media to promote the project, Williams and her colleagues Jennifer Duncan, head of Special Collections and Archives, and Liz Woolcott, head of Cataloging and Metadata services, used Qualtrics software to create a survey that allowed interested participants to add their social media reflection to the project.

Those who contributed to the project were able to do so in under 20 minutes and all online. Survey respondents were asked to share their thoughts on the election and had the option to provide additional information about themselves

“The information provided in the survey helped us organize the collection and will allow others to be able to see how reactions varied in different locations or between men and women, etc.,” noted Woolcott.

Although the project received responses from around the world, the Library collected the reflections as a part of its mission to gather the voices and perspectives of members of Northern Utah communities. “We hope to do this for coming presidential elections, and possibly state elections.” Duncan said. “Future researchers seeking to understand the diversity of the political culture of our state will require more than vote counts.”

The 2016 presidential election exposed the depths of a political divide for much of the country and the world was watching.

“Whether people were encouraged or discouraged by the election results, we wanted to collect the reflections of this momentous national event,” Williams said. “It is important for our children and future generations to know what we were thinking and feeling. Like tiles in a mosaic, each voice adds shape and dimension to our national identity.”