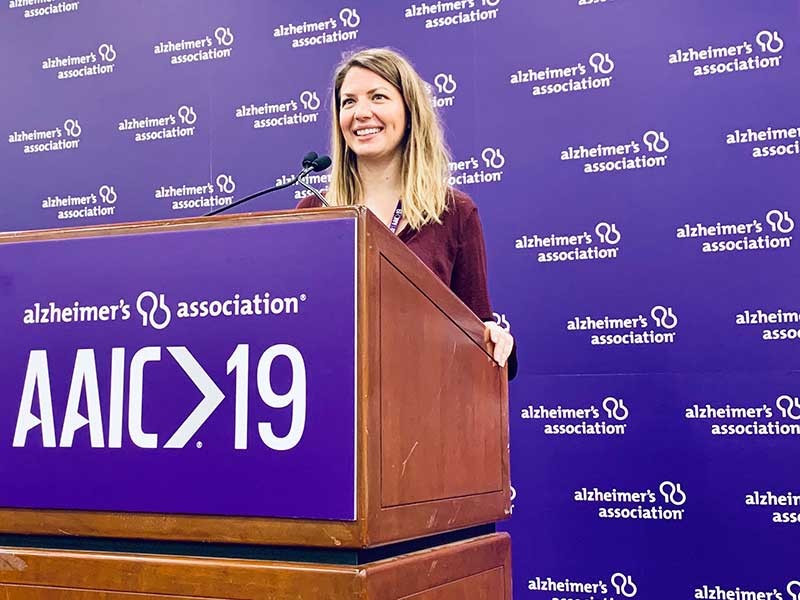 Utah State University doctoral student Elizabeth Vernon is responding to media attention from around the globe after being asked by the Alzheimer’s Association to present her research at a July 15 international news conference at the Los Angeles Conference Center in California.

V ernon and three other scientists were asked to present their research results on how older adults’ use of sleep medication can affect their risk of developing Alzheimer’s disease. Vernon’s work yielded surprising results on the difference in risk between men and women 65 and older. One of the most unexpected results of Vernon’s research is that women who took sleep medication and also had a sleep disturbance (such as insomnia) were at a 35% decreased risk of developing Alzheimer’s.

“We don't know for sure if the sleep medication is causing the protection for these women or not,” said Vernon. She stressed that the nature of the study was associational and not causal; in other words, although the association is there, the underlying cause is not currently known.

On the other hand, men taking sleep medication were at an almost 4 times increased risk of developing Alzheimer’s disease (compared to men who did not take sleep medication) regardless of whether they reported insomnia. Women were also at an increased risk if they took sleeping aids but did not have a sleep disturbance like insomnia.

Sleep disruption is a common behavioral challenge that significantly reduces the quality of life for people with dementia, as well as for their caregivers and family members.

“My advice would be to consider alternative interventions, such as sleep hygiene interventions or Cognitive Behavioral Therapy for Insomnia,” said Vernon. “This would allow for a sleep intervention without the possibility of negative side effects of some of these medications, such as falls and increased confusion.”

Vernon is a doctoral student in the Combined Clinical/Counseling PhD program in the Psychology Department in the Emma Eccles Jones College of Education and Human Services at USU. She has examined research using existent data from the “Cache County Study on Memory in Aging.”

She has been working in the Alzheimer's Disease and Cognitive Disorders Lab under the supervision of JoAnn Tschanz. Vernon completed her master’s degree at Utah State University in 2018; her thesis focused on examining sleep disturbances and sleep medication use in males and females with regards to risk for developing Alzheimer’s disease. Upon completion of her predoctoral internship and doctorate, Vernon looks forward to continuing a career that combines both clinical and academic work.