At first glance, one would not suppose that a modest office in the Agricultural Sciences Building at USU is directly affecting agriculture across the United States and in many of the Pacific islands, but the Western SARE Center at USU does just that. Numerous research projects in the Pacific Protectorates are led by Phil Rasmussen, director of the Western SARE Center and professor in USU’s Department of Plants, Soils and Climate.

Western SARE, which recently marked its 24th anniversary, is a USDA competitive grants program that funds research and education to foster profitable agriculture, protected environments and strong rural families and communities. The Western region of the nation’s land-grant universities and colleges includes agricultural research and extension programs in each of the 13 western states and the island territories and protectorates across the Pacific.

In the 16 years that Rasmussen has administered the Western Region SARE Center, USU has received more than $67 million to identify and manage more than 1,200 research and extension projects in the region. Recently, USDA awarded an additional $4.15 million to USU’s SARE Center for fiscal year 2013.

Rasmussen manages USDA-SARE research programs in all the Western states, and has traveled to the U.S. territory of Guam and the Pacific island protectorates to manage research programs and to instruct scientists and agricultural professions regarding sustainable agriculture systems. 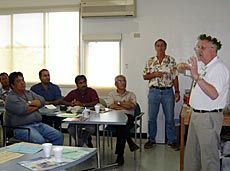 Dr. Rasmussen, wearing a Pohnpeian headdress of honor, teaches researchers and extension agents at the College of Micronesia campus at Kolonia, Pohnpei.