Philip Barlow, the Leonard J. Arrington Chair of Mormon History and Culture in Utah State University Religious Studies Program, presents his inaugural lecture on campus Wednesday, Feb. 13, and all are invited.
Barlow, who joined the university’s young Religious Studies Program in fall 2007, will present “Wish-Fulfillment, ‘The Opium of the People,’ and Terrorism: Is Religion Sick?” at 3 p.m. at the university’s Performance Hall (approximately 1090 E. 675 North). The lecture is free and a reception follows.
“The title of my lecture could be simplified to ‘Is Religion Sick?’ but I want to get behind the question,” Barlow said. “In the minds of many pivotal thinkers in Western civilization, religion does not fare well.”
For instance, Freud found religion to be a comforting illusion and pathology, based on the human desire for meaning and solace amidst the harsh realities of existence, Barlow said.
“Marx identified religion as the enemy of social progress, a drug to keep the deprived masses in a sweet stupor of ethereal, other-worldly hopes while the ruling classes enjoyed real wealth and power in the actual world of here and now,” he said. “A cluster of recent, articulate and popular books argue for an end to faith, insisting on the superiority of science and suggesting that terrorism is only the most flagrant of many ills by which religion poisons society, including conflict, mindless obedience, wasted time, the constriction of medical advances and the derailing of progressive political policies.”
Barlow said his lecture acknowledges the legitimacy of such concerns, but denies that they are sufficient to dismiss religion as such. It further attempts to show why the academic study of religion is essential to the humanities.
The study of religions, as in USU’s Religious Studies Program and those at other prestigious universities, is just that — the study of the world’s religions. It is not a forum to attack or undermine faith nor does it teach religiosity.
“Studying religion as a religious studies student is much like a doctor in training studies the heart or the brain,” Barlow said. “The student wants to find out how it works — the underpinnings.”
When asked what can be done with a degree in religious studies, Barlow replied, “anything.”
“Our students will learn to think critically about many things,” he said. “They will be prepared for the world.”
Barlow holds a doctorate in American religion and culture and from the Harvard Divinity School. He earned a master’s degree at Harvard in the history of Christianity. He earned a bachelor’s degree in psychology at Weber State College, where he graduated magna cum laude.
Prior to his arrival at USU he was a professor at Hanover College in the department of theological studies. In 2006-07, he was an associate research fellow at the Center for the Study of Religion and American Culture at Indiana University/Purdue University at Indianapolis. He was a Mellon Post-doctoral Fellow at the University of Rochester, department of religion and classics.
Barlow has received numerous honors and awards, including being named the 2007 Faculty Member of the Year at Hanover College, presented by Lambda Chi Alpha fraternity. He is the immediate past president of the Mormon History Association and is a recognized authority on American religious history. His books include “Mormons and the Bible: the Place of the Latter-day Saints in American Religion.”
Barlow joins Charles Prebish, Redd Chair in Religious Studies, in the new Religious Studies Program in the department of history and the College of Humanities, Arts and Social Sciences at Utah State University.
Contact: Philip Barlow (435) 797-3406
Writer: Patrick Williams (435) 797-1354 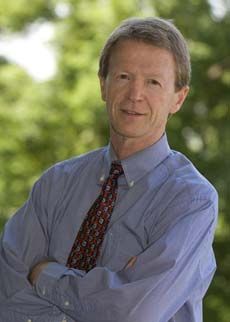