Master’s candidates Zac Covington, Evan Curtis and Alan Luce received an Award of Merit-Unique Contribution from the Utah chapter of the American Planning Association at the organization’s recent fall conference.
Members of the trio are students in the graduate Bioregional Planning program led by Richard E. Toth, professor in USU’s Department of Environment and Society in the College of Natural Resources.
“This award and other APA awards received for previous USU bioregional planning studies are not ‘student awards’ per se,” Toth says. “These studies compete with professional planning studies. Candidate projects for the awards are peer-reviewed by professional planners.”
The group’s study, “Little Bear River Watershed: Alternative Futures,” emphasizes various future growth alternatives for the watershed, which encompasses the communities of Mendon, Hyrum, Wellsville, Paradise and Avon in the southern portion of Utah’s Cache County.
“This region is poised for explosive growth in the next few decades,” Curtis says.
He and colleagues note the projected construction of Utah’s FrontRunner commuter rail project from the Salt Lake Valley to Brigham City. Though not expected to be completed until at least the next decade, the proposed project opens the possibility of shuttle service from southern Cache Valley through Wellsville Canyon to the Brigham City station.
“This would make communities in the Little Bear River Watershed a spectacular home for Wasatch Front commuters,” Toth says.
Also on the horizon are repeated attempts to complete a paved roadway from the southeastern edge of Cache County to recreational areas, including the Snowbasin ski resort and Pineview Reservoir, in nearby Weber County.
Even without these two transportation developments increasing Cache Valley’s accessibility to points south, the region is expected to grow significantly, the researchers say.
“Our goal with the project is to offer planners a flexible approach to help them make sound decisions about community development,” Curtis says.
The students’ landscape-level study features “tiered” modeling that enables various stakeholders to use the report’s data in a measured, incremental way. Tiers in the model include a wide range of criteria to be considered in residential and commercial development, including public health, safety and welfare; and wildland preservation, along with maintaining the communities’ historical and cultural identities.
“By layering each of these tiers, planners can see areas with safety hazards such as floodplains, steep slopes, fault zones and areas susceptible to soil liquefaction during earthquakes,” Luce says. “Planners can also review the potential impact of development on wildlife.”
With the tiered approach, Covington says, planners can view the projected consequences of conservative versus aggressive approaches to land development and see virtually hundreds of different alternative futures.
“This tool can really help county planners who are dealing with the diverse demands of many stakeholders,” he says.
What the report reveals, the researchers say, is that significant development can take place in the region without destroying the area’s beauty and historical integrity.
“We don’t have to have piecemeal development,” Toth says. “With research, we can make intelligent decisions that satisfy many needs. That’s the message we’re trying to get across to public officials and developers.”
What the student researchers also gained from the study is increased respect for the region’s original permanent settlers. The original settlement plan, they say, resulted in comfortable communities surrounded by mountain-view open space and areas supportive of agriculture.
The settlers’ reasons for organizing communities the way they did differ from today’s concerns. Safety from wild predators and hostile neighbors figured into the mix, along with the time required to travel to another community by horse and buggy. But the configuration still yields benefits for today’s residents. Scenic views, space for agriculture, close-knit communities and lack of urban congestion contribute to the area’s quality of life, the researchers say.
“The Little Bear River Watershed will continue to grow,” Curtis says. “We can’t stop growth but we can provide the tools to encourage smart growth.”
Related Links:
USU Department of Environment and Society
USU Graduate Program in Bioregional Planning
Future Perfect
Growing Smarter
USU College of Natural Resources
Contact: Richard E. Toth, 435-797-0694
Writer: Mary-Ann Muffoletto, 435-797-1429 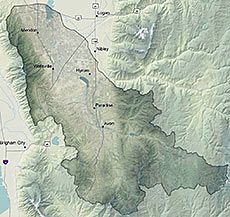