The number of reported cases of West Nile Virus disease in the United States is rising and before a drug can be developed to cure it, scientists have to understand how the virus does its damage.

John Morrey, director of the Institute for Antiviral Research (IAR) and research professor at Utah State University, and his colleagues are among those working on finding treatments, beginning with discovering exactly which parts of the body are affected and how the virus causes disease and, in some cases, death.

Understanding the mechanisms that cause a person to become sick is a complex puzzle to solve, compounded by the fact that people react somewhat differently and develop different symptoms.

Morrey said researchers at the IAR decided about nine years ago to focus their West Nile virus research on the neurological disease the virus can cause. Even after an infected person has shed the virus, neurological damage is already done and can continue to progress and leave people with life-changing health problems.

Morrey said many of the symptoms people with West Nile virus infection develop made him and IAR neurobiologists Hong Wang and Venkatraman Siddharthan wonder if the virus damages the autonomic nervous system —  the system that regulates many physical functions like breathing, the heart beating and the workings of the gastrointestinal (GI) tract. People who have been infected often have problems of the GI tract. Other symptoms include fever, headache, body aches, nausea, muscle weakness, fatigue and in serious cases, patients can have tremors, numbness, disorientation, vision problems and paralysis. Most people who get infected develop only mild symptoms and simply blame their illness on a cold or the flu. Others are not aware that they have the virus because they don’t get noticeable symptoms. Even patients with severe cases don’t have every symptom, so pinpointing what all severe and fatal cases have in common became a goal of the research.

With funding from the National Institutes of Health and support from the Utah Agricultural Experiment Station, the IAR team set out to find what physiological problem was common in patients who died from West Nile. They found that damage to the autonomic nervous system was not the cause, but that impaired breathing was the consistent factor in fatal cases of West Nile infection. That discovery was important, but then needed to find out why the lungs do not function normally.

Using various experimental approaches, the team found that the virus causes lesions on the phrenic neurons in the spinal cord, which starts in the neck and passes between the lungs to the diaphragm and causes it to move. In short, the phrenic nerve carries the signal that keeps you breathing even though you don’t have to actively think about inhaling and exhaling. But when the virus causes lesions in these neurons, the signal from the brain becomes impaired and the diaphragm does not work. They have also found West Nile virus can cause lesions in the lower brain stem, an area also important in controlling respiratory functions.

In one experiment, the team put individual mice — some infected and some not — in chambers equipped with sensors that detect changes in pressure when the animal breathes.

“These sensors are remarkably sensitive and that allow us to measure an animal’s ability to expire air from its lungs,” Morrey said. “Using this approach we found that West Nile virus animals are strongly impaired in their breathing. As additional evidence, we found that the same animals cannot respond very well to increased levels of CO2. Cells in the brain stem should react to CO2and signal the body to increase breathing to compensate for the increased CO2, but it didn’t happen.”

The researchers responded to that finding and the results of other experiments.

“We hypothesize that the virus infects certain parts of the brain and cerebral spinal cord and when those things combine the animal can’t breathe,” Morrey said.

Currently, doctors can only treat the symptoms of patients with West Nile virus disease. There is no known cure. Because the process of formulating new drugs, testing them extensively and finally getting them approved is long and difficult, the IAR team is looking at whether drugs used to treat other viral or neurological diseases might be effective against West Nile virus.

“We have a list of drugs to investigate that might be effective,” Morrey said. “In the scientific process, your hypotheses are usually wrong and you just have to be persistent. We also are interested in drugs that treat motor neuron diseases like Lou Gehrig’s disease because West Nile virus can be a motor neuron disease. We have the benefit of a lot of work that has already been done on neurological drugs that could help identify a treatment more quickly than developing a new drug.”

West Nile virus was first detected in the United States in 1999 and is now found in 47 of the lower 48 states, according to the Centers for Disease Control and Prevention. This year (as of August 21), 1,331 cases of West Nile infection in humans have been reported across the country, which is a record number for the same period of time in previous years. Most human infections this year are in Texas, Louisiana, Mississippi and North and South Dakota. The virus is in Utah, and three cases of human infection have been reported in the state as of early September. Most susceptible are those over 50 and those with compromised immune systems, particularly people who have had organ transplants and are taking anti-rejection medications. As the numbers of people infected and dying grows, so does the urgency to find a drug to treat the disease.

“Most people who get it won’t know they have it,” Morrey said. “But those who develop neurological symptoms really feel it and for people who have severe cases it is a life-changing experience. Even though they may survive, the neurological deficits can remain with them.” 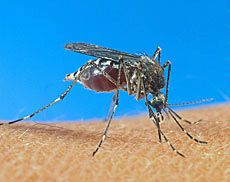 West Nile virus was first detected in the United States in 1999 and is now found in 47 of the lower 48 states. The virus is mosquito-borne. 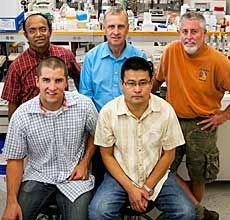 USU researchers at IAR are looking at whether drugs used to treat other viral or neurological diseases might be effective against West Nile. (back) Venkatraman Siddharthan, John Morrey, Neil Motter, (front) Kyle Kesler, Hong Wang.