A series of fortunate, random events brought together people with varied skills, experiences and connections to create a literary gem that breathes life into a fading language.

“This is a case of getting the right people and resources together to get something of significance done,” says Utah State University professor Mark Brunson.

Brunson, head of USU’s Department of Environment and Society, has a long-standing association with the National Park Service and with the Cooperative Ecosystem Studies Units Network, which serves as a platform to support varied research, educational and cultural ventures on behalf of the NPS and other federal agencies. When Brunson, who currently serves as USU’s representative to the Colorado Plateau CESU, heard about an undergraduate researcher’s desire to transcribe and publish a traditional Southern Paiute folk tale in its original language, he arranged NPS and Capitol Reef Natural History Association funding and other resources for the aspiring linguist to realize her dream.

On Aug. 10, 2013, University of Utah graduate Chloe Valentine Brent and tribal elder Eleanor Tom of the Southern Paiute Cedar Band unveiled their creation, Why the Moon Paints Her Face Black, during a bilingual presentation and book signing at Capitol Reef National Park.

“Scholars estimate there may be only 50 Southern Paiute speakers left,” Brent says.

The Orem, Utah, native, who earned a bachelor’s degree in linguistics from the U in May 2013, was inspired to pursue the project after viewing the 2008 documentary The Linguists. The film follows linguists Greg Anderson and David Harrison as they travel the world collecting audio recordings of dying languages.

“I was like, ‘Oh, my gosh — that’s what I want to do,’ though, at the time, I had no idea how I could get involved in a project like that,” Brent says.

During summer 2012, the student accepted an internship with Utah Valley University’s field station at Capitol Reef, where she became acquainted with members of the Paiute tribe.

“I was conducting astronomy activities for visitors and had prepared a talk based on a Paiute folk tale called ‘Why the North Star Stands Still,’” Brent says. “During that event, I met some of the tribal elders and learned about the story we eventually made into a children’s book.”

“We often think of written and spoken English as one and the same, but I learned that spoken language is fundamentally different from written language,” she says. “It was quite a revelation.”

As Brent listened to Tom recite the story repeated times, she heard variations, different pronunciations and other nuances.

“Language is dynamic,” she says. “It was a challenging process to transcribe the story because I wasn’t sure what to include and what not to include.”

Why the Moon Paints Her Face Black explains the phases of the moon, Brent says.

Father Sun, tribal chief, lives in the heavens with his wife, Moon, and children, the stars. Sun feasts on his children (the stars) to maintain his tremendous light and heat. Moon and stars disappear during the day — running from the fearsome Father Sun. But not every child escapes, so Moon paints her face black in mourning. Her star children cheer her up, which makes her face bright again…until the next time Father Sun gobbles some stars.

“Yeah, the story is a little depressing,” Brent laughs. “But hearing an ancient story in its original language is not — it’s amazing. I want to keep doing these kinds of projects.”

Working with the CESU network, Brunson has coordinated funding of a number of projects involving USU students and staff. The projects, conducted for national parks and monuments, have ranged from interpretative programs and tools to scientific research projects.

“This program especially benefits the smaller sites, which have limited staffing,” he says. “It’s been a very productive, mutually beneficial way to provide assistance to national parks and work experience for students.”

Why the Moon Paints Her Face Black is available for purchase through the Capitol Reef Natural History Association website. 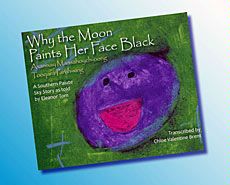 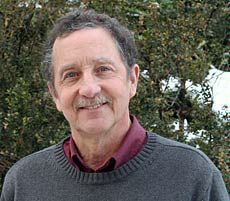 Working with the CESU network, Brunson, head of USU's Department of Environment and Society, has coordinated funding for a number of student-led projects for national parks and monuments, ranging from interpretative tools to scientific research.