At 8,500 feet above sea level, Utah State University scientists point to an unfolding environmental crisis that could ultimately threaten an iconic Yellowstone species just back from the brink of extinction.

In Dec. 2013, a panel of government experts recommended removing the grizzly bear from the endangered species list. But Wally Macfarlane and Jesse Logan warn the bruin is still in peril because the whitebark pine, a tree that contributes to the animal’s survival, is in peril.

In 2009, MacFarlane, a research associate in USU’s Department of Watershed Sciences, and Logan, a U.S. Forest Service entomologist and adjunct faculty member with USU’s Department of Wildland Resources, now retired, conducted aerial surveys of whitebark pine stands across the 28,000-square mile Greater Yellowstone Ecosystem that straddles Montana, Wyoming and Idaho. Their results were published in a recent issue of Ecological Applications.

“We documented widespread whitebark pine mortality from mountain pine beetle outbreaks,” says Macfarlane, who is a member of WATS faculty member Joe Wheaton’s Ecogeomorphology and Topographic Analysis Lab. “A cold snap that same year greatly slowed the outbreak, but as we’ve recently revisited the sites, we realize the beetle outbreak is now marching on.”

Climate change, he says, is allowing beetles to survive at higher altitudes and the whitebark pine is suffering.

“As we lose these trees, an important food source for grizzly bears also disappears,” says Macfarlane, who earned a bachelor’s degree in environmental studies from USU in 1996.

Healthy trees produce large cones containing seeds that birds known as Clark’s nutcrackers disperse throughout the forest, he says. Red squirrels cache the pine seeds in storage areas called ‘middens,’ which the grizzlies regularly raid. The bears, especially females, rely on the calorie-rich seeds to increase their fat reserves prior to hibernation.

Some scientists argue the opportunistic bears will find other food sources to make up for the shortfall of seeds.

“That remains to be seen,” says Macfarlane. “This makes a very interesting conservation issue.”

Read more about the interconnected nature of Yellowstone species in The Huffington Post feature. 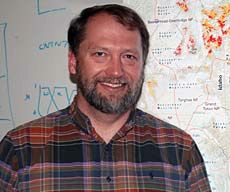 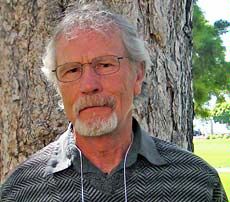