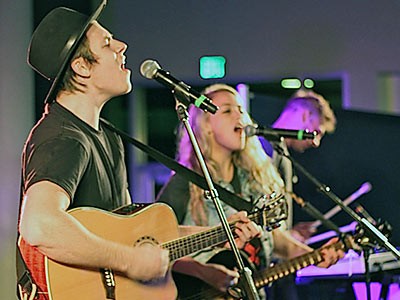 The Student Life section of Utah State Today highlights work written by the talented student journalists at Utah State University. Each week, the editor selects a story that has been published in The Utah Statesman or Utah State News Service (formerly The Hard News Café) or both for inclusion in Utah State Today without additional editing by its editor.

Logan City Limits will be even bigger this year

By Miranda Lorenc, in the Utah Statesman, Thursday, April 7, 2016

On Saturday, the 7th Logan City Limits — a free, all-day music festival hosted by Aggie Radio and the Utah State University Student Association, or USUSA — will showcase bands from all along the Wasatch front and even from Las Vegas and Los Angeles. The bands will perform in the Taggart Student Center from 11 a.m. to 11 p.m.

The event has grown a lot in recent years, said Nate Dukatz, a senior in management information systems and the director of arts and lectures. This year year’s event is projected to be even bigger than last year’s, with 17 bands, a big-name headliner and plenty of food and activities for visitors to enjoy.

Dukatz said he wanted to go bigger this year because he knows that “this is kind of a group of students that doesn’t necessarily get events catered to them very often.”

For example, the End of Year Bash has a music style that is works for a lot of people within a certain niche, he said, but doesn’t appeal to other groups who enjoy Indie-alternative music. Logan City Limits is organized to better cater to those students.

In the past, Logan City Limits has had one full-sized stage for the larger bands and a smaller acoustic one for transitioning groups, Dukatz said, but this is the first time it will have two full stages.

“This will be the first time that we actually have no plain acoustic acts,” he said. “Every single act is a band, a full band.”

Many of the visiting bands have released new albums or extended plays lately and all of them have songs on Spotify, said Derrick Saunders, a senior in management information systems.

Saunders created a Spotify playlist (#logancitylimits) for students to enjoy.

Most of the visiting groups are local bands that are growing in popularity or have come to events in the past, Saunders said. Other bands have heard about the event and requested to join the line-up.

The headliner this year is a band from Los Angeles called Smallpools, which is bigger than any other band they’ve had in previous years, he said.

In addition to the music playing all day, there will be food trucks, vendors and activities hosted by on campus clubs and organizations, said Terran Maynard, a sophomore in marketing. She said the Quidditch club which will set up Quidditch games for visitors to play during the festival.

“There’s going to be a lot to do,” Maynard said. “Listening to music first and foremost, but in addition to that, get some good food, hang out with your friends, throw a Frisbee, play some Quidditch. (It’s) just a cool environment.”

For visitors planning on coming to just see the band that they know and have heard of before and then leave, Dukatz said, the sets are only 30 minutes long. He suggests they stay and see as many bands as possible.

“I can promise anyone who comes to this show for one of these bands, they will like every other band that they see,” he said. “Because it’s that kind of show, it’s pretty genre specific and I’ve organized the order of the show to flow well musically.”