USU statistics professor Piotr Kokoszka recalls long work days while earning his doctorate at Boston University with faculty mentor Murad Taqqu. Just two months into the program, which he started in September 1990, Kokoszka finished his first published paper. As the Christmas break approached, he suggested a few days of rest.


Professor Taqqu replied, ‘When we are dead, we can rest forever, not just for a few days,’ Kokoszka told family and friends who joined him Oct. 3 at USU President Stan Albrecht’s home for the first talk in Utah State University’s 2007-08 Inaugural Professor Lecture Series. The series highlights the accomplishments of university faculty who have been promoted to full professor in the past year.
“Professor Taqqu was demanding, but I benefited from his attention to precision, clarity and dedication to hard work,” says Kokoszka, who joined USU’s Department of Mathematics and Statistics faculty in 2000.
Not that the native of Poland coasted into Boston University’s program. During his teens, Kokoszka was accepted into a rigorous math-intensive program in secondary school, where he received instruction from university professors.
“We had seven hours of mathematics a week, so after four years I pretty much had the same preparation as a math major graduating after four years of undergraduate study in the U.S.,” he says.
Kokoszka continued his studies at Wroclaw Polytechnic University. His official course of study was applied mathematics, though he mostly pursued abstract mathematics with a special focus on probability theory.
“I wanted to study physics or astrophysics but I was advised that Poland had no money for expensive equipment,” he says. “I was told mathematics research could be done for free and Polish mathematicians were among the best in the world.”
As Kokoszka was completing his master’s degree at Wroclaw Polytechnic, his advisor asked him to review the first three chapters of a book draft by Taqqu, the renowned researcher who would become his doctoral advisor. Within a few weeks of sending his comments to Taqqu, the latter replied to Kokoszka with a letter urging him to apply to Boston University’s doctoral program.
After graduation, Kokoszka accepted a postdoctoral position at the University of Utah, where he met his future wife, Gudrun Schellhas. A native of Germany, Schellhas was a graduate student in economics. The pair married in 1995 and, the following year, accepted positions at England’s University of Liverpool.
“The University of Liverpool offered excellent opportunities for professional growth, but we missed the sunny skies and open spaces of Utah,” Kokoszka says.
In July 2000, Kokoszka joined USU, where his wife serves as middleware administrator in the university’s Information Technology Department.
Kokoszka’s research interests range from space physics, financial econometrics and computer network traffic to heavy-tailed time series, long-range dependent and self-similar time series. He was named College of Science Faculty Researcher of the Year in 2007.
“I’ve had the opportunity to work with many excellent collaborators in both Europe and the United States which, in part, explains my many interests,” he says.
Kokoszka says heavy-tailed distribution theory is useful in describing phenomena in which some observations are much larger than usual – for example, Internet traffic. Another focus of his studies is long-range dependent processes.
“These models are particularly useful for study of time series exhibiting long periods of growth or decline – such as climatic data,” he says.
Kokoszka says Cache Valley reminds him of his childhood in Poland, where he spent most of his summers with his grandparents in the small town of Mlawa.
“Mlawa is in a post-glacial valley in the northeastern part of the country,” he says. “It has houses all over the place with cows and horses grazing in between. I loved to ride my bike and go on long hikes in the hills and forests surrounding Mlawa; I can do the same in Cache Valley.”
In 2002, the Kokoszkas welcomed a daughter, Vanessa, into their family.
“After living in different countries, it is somewhat strange for Gudrun and me that Logan is the only home our daughter has ever known,” Kokoszka says. “But she has made Logan a true home for us, too.”
Related links:
USU Department of Mathematics and Statistics
USU College of Science
Contact: Piotr Kokoszka [piotr.kokoszka@usu.edu], 435-797-0746 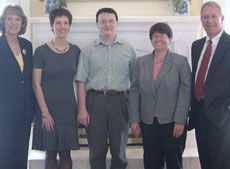 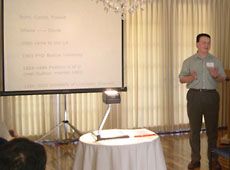 Statistician Piotr Kokoszka graduated from Poland's Wroclaw Polytechnic University before pursuing doctoral studies at Boston University. He was named College of Science Faculty Researcher of the Year in 2007.