The retiring of the space shuttle, with its strong ties to Utah State University’s College of Engineering, is a university legacy its students continue to honor, most recently when they took home the gold out of a field of 24 schools participating in the ninth annual Student Unmanned Air Systems Competition at Lexington Park, Md.

USU is the first repeat winner of the competition, having won the aerial contest for the first time in 2009. In addition, the USU rotary team won ninth place in its first-ever appearance in the national competition.

The school has participated in the contest since 2008, prompted by Yangquan Chen, director of the Center for Self-Organizing and Intelligent Systems (CSOIS) at USU. He is the faculty mentor for both teams and guiding force behind their success, said Calvin Coopmans, the team’s graduate advisor, doctoral student and CSOIS graduate assistant.

“We did pretty darn well,” Coopmans said. “We cleaned house.”

The house cleaning included a near sweep of the categories with the fixed-wing team taking first place in Flight Mission, Journal Paper and Oral Presentation (flight readiness review). Not only did they beat out the likes of North Carolina and the U.S. Air Force Academy, they also earned an invitation a week later to present at a prestigious symposium hosted by the Johns Hopkins University Applied Physics Laboratory.

They don’t have the sexiest name — Fixed-Wing Open Source Autonomous Miniature Unmanned Aerial Vehicles (FOSAM-UAV) — but what these young engineering students lack in marketing, they more than make up in engineering. They not only got their bird in the air, they made it fully autonomous with an in-flight imagery system that included onboard automatic target recognition and three imagery operator stations on the ground.

Coopmans said they had their share of challenges leading up to the event. Only a few days before they were scheduled to leave, the plane they were testing encountered troubles and took a sudden nose dive from some 250 feet up.

“It was a pretty terrible crash,” he said. “It hit hard and destroyed parts of the plane.”

A similar incident occurred with the rotary team.

Coopmans said it was discouraging to have things like that happen toward the end of the testing phase.

“It ended up making us very busy just prior to the beginning of the competition,” he said. “We had a lot of work to do in the hotel, but we managed to pull it together.”

He said he was proud of how hard the teams worked and how well they stayed focused.

While they love the recognition the contest brings them, they take a good deal of pride in knowing that what they are doing has real-world application. Learning does not get any better than that, Coopmans said.

His team is a disciplined group of students who build and practice flying UAVs — unmanned aerial vehicles — for more than just competition; their work is directly tied to the AggieAir team that flies UAVs for USU’s Utah Water Research Laboratory. No other school team flies and tests unmanned systems for remote sensing. It is a feather in their cap and a distinct advantage the water lab provides them. In turn, the aircraft that this research and development team of students build, test and tweak enables the water lab to engage in remote sensing measurements beyond what any other university can do, said Mac McKee, Water Lab director.

“It’s a symbiotic relationship,” Coopmans said. “The competition is close to what we do in our actual research and it helps to push it along.”

It is research that involves flying payloads with cameras that record imagery in the spectrums of red, green, blue and near-infrared. It is programming computers to fly the planes, process the data and run it through USU-developed algorithms that eventually provide real-life help to farmers and resource managers in tracking soil moisture content, riverbeds and invasive plants.

“I’ve had the opportunity to work on satellites, lasers and all kinds of crazy stuff, but this is the coolest thing yet,” he said.

And stay tuned for what’s to come. It was a young team of six students on the fixed-wing unit and four on the rotary team that Coopmans brought with him this year; next year they’ll be seasoned competitors.

“We will have two teams again and there will be nothing stopping the rotary team,” he said. “They were new this year. Next year they are going to be ready and they will do well.”

Sounding like a coach with a card up his sleeve, Coopmans said he plans to change the fixed wing system in a surprising way.

“I won’t say exactly what we will be changing, but next year things are going to be drastically different.”

--J.J. Montgomery, North Ogden, Utah. He is now a senior in computer science. He is the chief image operator and software designer on FOSAM. He said he plans to graduate in the spring and maybe continue at USU’s Space Dynamics Laboratory, or maybe move out to Silicon Valley.

--Patrick Ball, Idaho Falls, Idaho, is a recent graduate in mechanical engineering. He’s the FOSAM aerodynamics guy. In August he starts is master’s program in aeronautics at Purdue University.

--Brad Neumann, Bountiful, Utah, graduated in May with a bachelor’s degree in mechanical engineering. He is the FOSAM image operator. He is currently working as a design engineer for Thermo Fisher Scientific.

--Jeremy Frint, Green River, Wyo., is a junior in civil engineering. He is the FOSAM fixed wing launcher and frame builder. He plans to continue pursuing his undergraduate degree at USU.

--Brandon Stark, Powder Springs, Ga., is a doctoral student in electrical engineering and graduate advisor to the ROSAM team. He plans to continue with USU in his doctoral studies.

--Aaron Dennis, Logan, is a sophomore in electrical engineering and ROSAM undergraduate team leader. He plans to finish his undergraduate degree and eventually pursue a master’s. 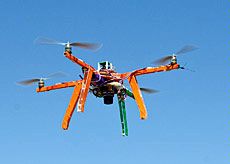 A helicopter craft developed by the USU Rotary team hovers 20-feet in the air. 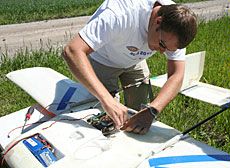 A USU engineering student with the fixed-wing team readies a craft for flight. USU's team took home the gold out of a field of 24 schools participating in the ninth annual Student Unmanned Air Systems Competition at Lexington Park, Md. 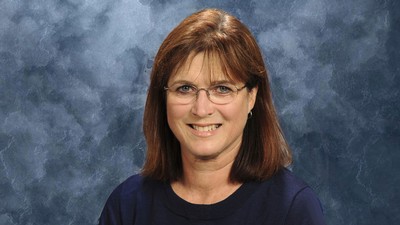