Days after a 9.0 magnitude earthquake triggered a deadly tsunami off the eastern coast of Japan last March, videos of the water surging inland went viral. News reports showed images of the devastation and aired stories of survivors still searching for loved ones.

Now, nearly a year later, much of the mainstream media has moved on.

Atsuko Neely, a senior lecturer at Utah State University, wants to change that. Last month she enlisted students and community members to participate in an international effort to translate Protecting Today, a documentary produced by a 20-year-old college student at University of Yamanashi in Kofu, Japan.

The 70-minute film captures life after the March 11, 2011, tsunami that killed nearly 16,000 people and left more than 3,000 missing. There are no shots of people fleeing the wall of water. Instead, the film depicts how life is now — one the filmmaker Yuka Kanno no longer recognizes. She made Protecting Today because she was afraid the world is already forgetting.

“People’s thoughts will change as time passes,” she said in an interview with The Asahi Shimbun newspaper. “I wanted to record what I see now.”

Kanno was 20 when she began interviewing survivors of her hometown Rikuzentakata located in Iwate Prefecture. Piles of debris and rusting cars still mar the landscape.

Just a few hours after Japanese students at USU received word of the disaster, they began mobilizing a fundraising drive. The effort was spearheaded by Kazuya Yamauchi, ’12 of Tokyo. He called home to find how his family was faring, but phone traffic was intense and I couldn’t talk to them, Kazuya said.

He received word over e-mail that they were okay, but knew his countrymen were not. Last spring, students and community members donated almost $17,000 to the Japanese Red Cross.

“It was amazing how people at Utah State participated,” he said.

Yamauchi returned to Japan in May. He borrowed a Geiger counter and drove to the Fukushima nuclear power plant where he used his iPhone’s GPS function to map radiation hotspots. It was several times higher than in Tokyo. The numbers confirmed for him that Japan has a long way to go before it is fine.

The message of Protecting Today resonated with Yamauchi and the other 12 students participating in the translation project. An effort to bring the documentary to wider audience began in February 2012 at Purdue University by Kazumi Hatasa — a colleague of Neely’s.  Now, students at more than a dozen universities in the United States will translate sections.

“I felt the later part of the movie has to do with an upbeat plan for the future,” she said. “I felt as if it would be more meaningful for us to do that part.”

“I have no idea what was where,” she says. “But [our house] was definitely here, I’m certain. People seem to know where their house was.”

The first segment is the only one completed. The rest of the film is without subtitles to explain Kanno’s interviews with individuals about what they lost — their homes, jobs, family members and friends. Women tear up as they speak. Scenes skip to an old school where a withered bouquet rests on a top floor. After the screening Neely opened the floor for discussion.

“We are not even on the right side of the world,” a student said. “What right do we have to even translate? Can we really express what they are trying to say?”

“All we can do is to try,” she said, adding that Kanno is aware of the project and happy the film will reach others outside Japan. “The fact that the film was made by a student and translated by a bunch of students, I think that is very meaningful. Of course, I am a teacher and am biased.”

But for students like Lauren Hooker, ’13, the project is an opportunity for a different ending. She was in Tokyo when the earthquake struck, one year into serving an LDS mission. By then she was used to feeling an occasional rumble of the earth.

“Normally earthquakes just last three or ten seconds and then they’re over,” she said. “We were just waiting for this one to stop.”

Five minutes later it did. And then the aftershocks began, which are still occurring nearly a year later. Hooker was transferred to a southern portion of the country to complete her mission. At the time, people were afraid about accessing clean water because of the radiation.

Hooker eventually visited Sendai — the area hit the hardest by the tsunami. Cars rested in cemeteries, houses were washed from their frames and rice cookers lying out in the open.

“This was everything people had. It was just piles [of debris],” she said. “Atsuko said this project was a good way to thank the people who donated and let them hear from the people of Japan. I thought it was a good opportunity — it makes everything more real.”

Once the translation project is completed this spring, a final version will be shown at Utah State University that is open to the public. For more information, contact Atsuko Neely at Atsuko.neely@usu.edu 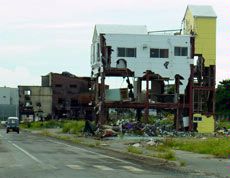 Clean up continues nearly a year after the devastating tsunami in eastern Japan. "Protecting Today" is a documentary that documents life today. (photo courtesy Kazuya Yamauchi) 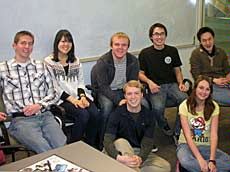 A team of USU students is working a translation of the documentary in a project spearheaded by Atsuko Neely, a senior lecturer at Utah State University. (photo courtesy Jake Olsen) 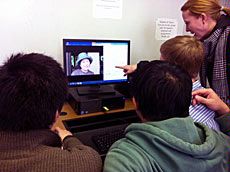 USU students view the documentary "Protecting Today" on a laptop while working on the translation. (photo courtesy Atsuko Neely)