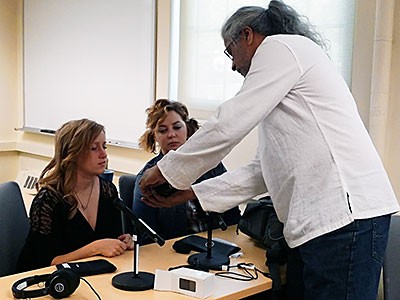 Dr. Guha Shankar from the Library of Congress assists students with the audio recording equipment they will use in the field.

In a joint initiative, Utah State University Libraries, the English Department and the American Folklife Center of the Library of Congress, are conducting a field school called “Voices: Refugees in Cache Valley.” The intensive three-week folklore course will focus on collecting and preserving stories from Karen, Burmese and Eritrean refugees living in Cache Valley.

The project was set in motion by USU Libraries’ Randy Williams, Fife Folklore Archives curator and oral history specialist, and Lisa Gabbert, associate professor of English and director of USU’s Folklore Program. The hands-on field course teaches photography, recording and interviewing skills. Williams said the project is a culmination of a lifelong passion and wished she would have had the opportunity to participate in a field school when she was a student.

USU graduate student Wes Van de Water shared with the class on May 14 what he had learned about Logan’s growing refugee population.

“My main concern right now is finishing my master’s thesis, and these people are coming from a place where they are fearing for their lives,” said Van de Water. “My concerns are seemingly insignificant by comparison.”

During the first week students were taught audio recording and photography skills. Invited speaker Elaine Thatcher told the class about her 30 years of public folklore and taught students about photography in the field. Most of the students said it was their first time to record audio and take pictures with equipment other than their phones. Thatcher detailed tips and tricks in fieldwork photography to ready the students for the Digital Single-Lens Reflex cameras or DSLRs and high end recording equipment.

During Thatcher’s presentations, students discussed whether it was ethical to edit photos. Dr. Guha Shankar from the Library of Congress asked the students to consider whether the act of taking an image was editing.

Shankar is developing the structure for the program. He said the Library of Congress will be “acting like training wheels” for this “folklore bootcamp.” The students were then given a chance to continue practice with the DSLRs.

In 2008, the first small group of Burmese refugees arrived in Cache Valley. The refugees left behind a war-torn country and sparsely supplied refugee camps. Many had only the clothes on their backs as they trickled into the valley. Now, seven years later, several hundred refugees call Cache Valley their home.

Chit Moe is from the Karen state in Myanmar and studies computer science at USU. He acts as a liaison for the class and the refugee community. Moe and Har Be Bar, who is from the Burmese Muslim community and also a student at USU, and Berhane Debasai, who is from the Eritrean community, introduced themselves to the class before they worked to set up interviews and work as interpreters.

Students will work in teams as they interview members from the refugee community. Following the first week of classes, the students will conduct one week of field work and one week of analysis. At the end of the class they will create a digital collection and exhibit to share the stories of the refugees.

Thatcher summarized her folklore experiences for the class.

“I like to get people doing what they do,” said Thatcher. “It is just the best career ever.”

Students are documenting their experiences on a class blog. Those interested can also monitor their activities on Twitter.

Final presentations will be made at the Logan Library May 28 at 7 p.m., where the event will be bilingual. All are welcome.

The fieldschool, including fieldwork kits, was funded by the USU Merrill Cazier Library, USU English Department and by a grant from the Utah Humanities Council and Utah State History. 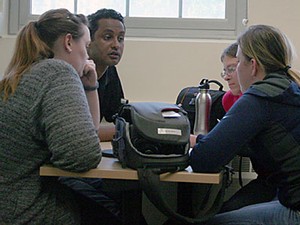 Students listen while Berhane Debasai details life as a refugee. 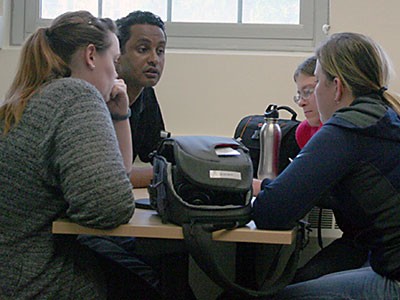