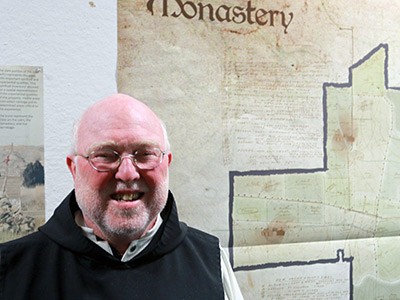 Father Brendan Freeman from Our Lady of the Holy Trinity Trappist Monastery in the Ogden Valley attended a meeting in Logan where USU LAEP students presented plans for possible future uses of monastery's land.

Monks from Our Lady of the Holy Trinity Trappist Monastery are faced with an important decision in the coming years: how to transfer ownership and use of the monastery and surrounding land in Ogden Valley.

The monastery plans to transfer ownership of 1,800 acres of land that has been largely used for agriculture, and a team of five USU students, including Chris Binder, Nick Tanner, Graydon Bascom, Stephen Peaden and Grant Hardy, led by Practitioner in Residence Todd Johnson, hopes to guide the monks in their quest to find a suitable plan for the future of the Huntsville monastery.

“Our students were invited to explore alternative possibilities and future scenarios for this beautiful part of the valley and provide the monks with ideas to guide their next steps,” said LAEP assistant professor Carlos Licon.

The monastery has played an integral role in the local community since its establishment in 1947; however, as the monks age, it has been decided that a new role should be found for the land. Superior of the abbey, Father Brendan Freeman, attended the meeting in Logan and said the average age of the monastery’s monks is now 80-years-old. The monastery has not added any new monks in more than 30 years.

“The last one to persevere was in 1980,” Freeman said. “That was quite a few years ago. It’s not a monetary question. There’s no vocations coming in and there’s no way you can make that happen. Can’t buy it. We call it a call from God and it’s just not out there right now.”

The land on which the monastery resides is valuable, and the area is under increasing pressure from developers, Licon said. Citizens from surrounding towns and cities, and representatives from various groups, including the Ogden Valley Land Trust, attended the meeting at USU hoping to express their opinions on the land’s future to the monks.

What to do with the land isn’t just debated among Ogden Valley’s residents, but also among the monks themselves, said Freeman. The LAEP presentation served as a way for the monks to see the costs and benefits of various options, from leaving the land to agriculture to turning it over for development. However, the crux of the presentation was the design the graduate students have spent the semester developing.

“After meeting the monks and spending time in the abbey, our students realized their analysis needed to integrate the spiritual dimension of the monks’ legacy in this place,” Licon said.

The team worked to preserve that legacy by upholding the principals of education, inspiration and healing during their design process.

“These values were translated into the design recommended for the property though various mechanisms including conservation easements, continuing the agricultural tradition of the land, preserving key historical elements and ensuring public access [to the area],” team member Binder said.

The students have proposed putting the property into a conservation easement that would allow the monks to put constraints on how the land could be used and developed by future owners. The design calls for small areas of development in places that would have minimal impact on the overall spiritual feeling of the land surrounding the monastery. The students proposed maintaining a system of trails and retreat buildings on the land that could continue to serve people seeking a place for meditation and reflection.

Another issue that the students said could be addressed with a conservation easement is water. A natural spring on the monks’ property currently provides the city of Huntsville with a majority of its water, and any changes to property ownership would have an effect on the city’s drinking water.

Hardy said that what the monks decide to do with the monastery has the potential to define the future of development in the Ogden Valley.

The monks do hope to make some money from the sale of the land that they can contribute to charity and to support other monasteries. It may be a few years before the monks make a final decision, but the USU students say they are willing and ready to develop a more detailed land plan for the monks if they are called upon for more help. 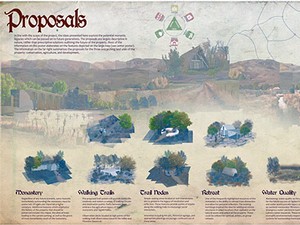 The USU students presented several options in the proposal. 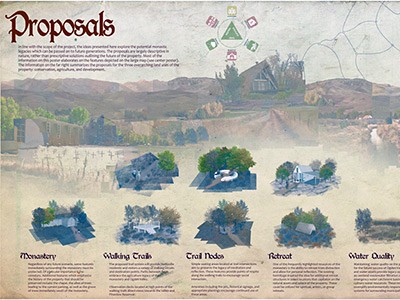