A study authored by a graduate student from Utah State University provides new insight on the relationship between traumatic brain injury and the progression of Alzheimer’s disease.

It also was named Paper of the Year by the journal International Psychogeriatrics.

Mac Gilbert wrote his first ever lead-authored paper in 2013 as a doctoral student in psychology. (The study has five coathors.) The article reported findings from the Cache County Memory Study, indicating that people who experienced a TBI within ten years of the onset of Alzheimer’s disease were more likely to experience a faster progression of the disease.

Other researchers have shown a relationship between TBI and an increased risk for Alzheimer’s disease. This study helped clarify the role of TBI in the rate of Alzheimer’s progression.

The work resonates with Gilbert, who spent time interviewing people with dementia and their families shortly after he came to USU as part of the Cache County Memory Study.

“It’s pretty important because once you get Alzheimer’s it’s not like your life ends right there,” Gilbert said.

Since there is currently no cure for Alzheimer’s, the goal is to keep those who have it as independent as possible, for as long as possible.

To him, the findings show how important it is to protect the head and guard against falls as people age, especially among those with a family history of Alzheimer’s disease. That care could buy months of independence after its onset.

Those months can ease the strain on caregivers looking after a loved one with dementia. Sometimes a caregiver opts to quit work, or to pay for round-the-clock care for a family member.

“In addition to his research, Mac has been a great asset in meeting our participants and treating them with the utmost respect and care,” said his mentor JoAnn Tschnz, a clinical neurologist in the Psychology Department within the Emma Eccles Jones College of Education and Human Services. “His dissertation work will build off the findings from this paper.”

The article was entitled “The association of traumatic brain injury with the rate of progression of cognitive and functional impairment in a population-based cohort of Alzheimer’s disease: The Cache County Dementia Progression Study.” It followed 325 people who had been diagnosed with Alzheimer’s disease for up to 11 years. It also examined the TBI history of the group. 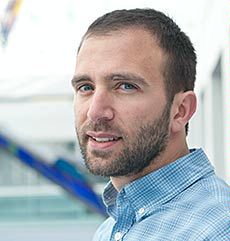 USU doctoral student Mac Gilbert is lead author on 'Paper of the Year' for the journal ‘International Psychogeriatrics.’