Utah State University’s Swaner Preserve and EcoCenter has been recognized for its role in establishing Park City as a national “green” leader.

Park City was one of only two EPA Green Power communities nationwide to receive the award for purchasing renewable energy in amounts that exceed EPA purchase requirements for residents’ and businesses’ collective green power purchase.

Swaner was recognized for its ongoing clean energy use, energy efficiency (54 percent cost savings over conventional design), educational programs, its efforts on This Green Earth, an environmental radio show, and because it was the first LEED platinum new construction building in the state, the highest ranking recognized by the U.S. Green Building Council.

“The Swaner EcoCenter has received awards from a number of national entities over the past two years, mostly for the creation of the LEED Platinum EcoCenter, but this award is really meaningful to us because it comes from our community,” said Annette Herman, director of the Swaner EcoCenter and Preserve. “Park City is known nationally for green initiatives. To be acknowledged for the role that Swaner Preserve and EcoCenter played in setting Park City apart in the eyes of the EPA is really special.”

According to the EPA, Park City’s current green power purchase of more than 11 million kilowatt-hours is equivalent to avoiding the carbon dioxide emissions of nearly 2,000 passenger vehicles per year or the amount of electricity needed to power nearly 1,000 average American homes annually.

The Swaner Preserve and EcoCenter consists of a 1,200-acre land trust in the Snyderville Basin and a 10,000-square-foot, state-of-the-art facility dedicated to environmental education. The preserve protects critical wetland and foothill terrain in the heart of one of the state’s fastest-growing areas. The EcoCenter, completed in 2009, is a multi-use facility with space for educational and community activities. The Swaner Preserve and EcoCenter became a part of Utah State University in January 2010. 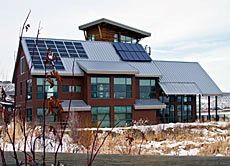 The Swaner EcoCenter has a rooftop array of photovoltaic panels that harness solar energy to generate 9,400 kilowatt-hours of electricity annually. When the EcoCenter is "dark," excess electricity produced on-site is fed back into the grid.