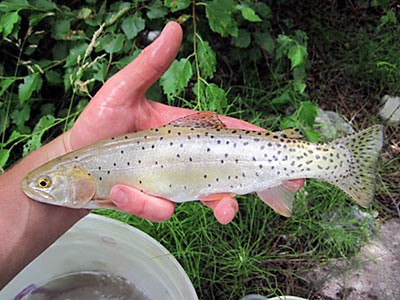 Can the impact of wildfire on fish habitat be measured? How do local characteristics like geology, topography and vegetation contribute to fire severity? And how can required mitigation efforts make the most out of taxpayer funds?

These are among questions Utah State University watershed science doctoral students Colton Finch and Keeling Schaffrath pondered as they began the Utah Division of Wildland Resources-funded Twitchell Canyon Fire research project. The over-arching goal of the research is to restore native fish species, including Bonneville cutthroat trout, to streams in Utah’s Tushar Mountains affected by the 2010 wildfire that consumed more than 30,000 acres.

The watersheds of these remote, 12,000-foot peaks, located in south central part of the state, do not provide data easily.

Accessibility was the biggest challenge, the students say. Hiking on foot was impractical due to the deep canyons, boulder fields, log jams and long distances. The research team asked, “What is the best way to measure the condition of 25 miles of important fish habitat if we only have a few weeks to gather the data and much of the stream is inaccessible?”

“That’s where the National Science Foundation came in,” says Finch, a student in watershed sciences professor Phaedra Budy’s Fish Ecology Lab. “Their National Center for Airborne Laser Mapping has access to technology, such as aerial lidar equipment, that is difficult for state agencies and universities to own independently.”

Each year, NCALM provides up to ten awards to graduate student PI’s whose research would benefit from the high-resolution topographic maps. Finch and Schaffrath, a student in watershed sciences faculty member Patrick Belmont’s hydrology lab, submitted a successful proposal, selected from a competitive, nationwide pool of dozens of applications.

Within a few months, the small NCALM plane, with a belly full of aerial mapping instrumentation, was flying over the Tushar Mountains gathering information from over three streams in Fishlake National Forest. Two of these, Shingle and Fish Creeks, were within the area burned by the fire and one stream, Beaver Creek, drained an adjacent unburned area.

Aerial data gathered by the plane is allowing Finch and Schaffrath to build three-dimensional maps of each stream. These maps allow the researchers to measure the quantity, quality and distribution of habitat for Bonneville cutthroat trout.

“Aerial lidar is the [fastest] way to collect topography information without having to stomp around in the bushes with the rattlesnakes,” Finch says.

The ability to combine index site data with the lidar topographic maps is enabling the USU research team to create an up-scaled map of the entire watershed.

“We are not sure yet if all the fish disappeared because the habitat was all destroyed by fire, or if the fish suffocated during the fire and there is still healthy habitat,” Finch says.

“With answers to our research questions, we’ll be better equipped to map the abundance and connectivity of patches of Bonneville cutthroat trout habitat in burned reaches relative to unburned reaches,” Schaffrath says. 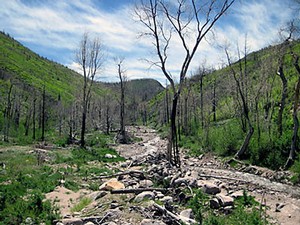 An upstream view of the vegetation loss and channel aggradation typical in middle sections of Shingle Creek, an area studied by USU doctoral students Colton Finch and Keeling Schaffrath. Photo by Colton Finch. 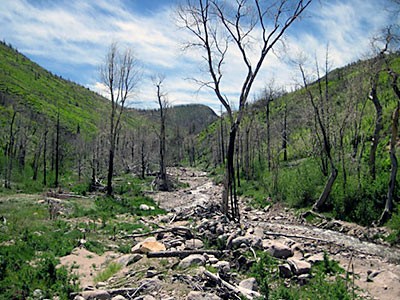