“Habitat is the focus of wildlife study,” says the wildlife biology major in USU’s Department of Wildland Resources. “How are animals adapting to changes and surviving in their environment?”

Graham is one of three Utah recipients of this year’s competitive $2,500 student grants from the Utah Chapter of The Wildlife Society. The award supports her continued study of Greater sage-grouse and the bird’s habitat in Utah’s remote northwest corner.

“I’ve had six flat tires in last couple of months,” says the master’s student, whose research takes her over rough terrain in rural Box Elder County. “So the additional funding is very much appreciated.”

“As part of the collaborative effort, which includes private landowners, the BLM is using a variety of treatments to protect critical habitat where the birds feed, nest, mate, brood and seek shelter from predators,” Graham says.

Sage-grouse occupy less than 50 percent of their historic range prior to European settlement, she says. Habitat loss and fragmentation from development and spread of invasive species, along with disease and predation, are taking their toll on bird populations. Sage-grouse also suffer from changes in habitat following wildfires.

The BLM is using both herbicide and mechanical treatments to curtail problem vegetation and is experimenting with a newcomer plant that holds promise as a potential solution to disappearing habitat.

“The BLM is seeding areas with forage kochia using a technique called ‘greenstripping,’” Graham says. “The idea is create fire resistant strips of kochia that will disrupt the wildfire cycle and allow native species to reestablish themselves.”

Forage kochia, she says, may be a plant that can provide sustenance for both domestic animals and wildlife.

“Cattle love it, it’s high in protein and it stays moist year round,” Graham says. “The question is: how will sage-grouse react to it?”

To find out, the scientist has been tracking birds via radio collars over the past year. Braving widely ranging temperatures at all hours of the day and night, Graham and her team follow the birds on foot, by air and using all-terrain vehicles.

“I’ve learned to wear hand-warmers in my gloves,” she says. “I’m also learning to think like a sage-grouse.”

Similar in appearance to chickens, Greater sage-grouse sport mottled feathers of grayish brown, black bellies and pointed, spiky tails. Larger than the females, males range between four and seven pounds in weight and feature large white ruff around their necks, yellow eye combs and bright yellow air sacks on their breasts that they inflate to impress potential mates. Each spring, in a distinctive mating dance, male sage-grouse “strut” on breeding grounds called “leks,” where they attract females and deter fellow competitors.

Preserving habitat for the birds is critical, she says, to prevent the imperiled creatures from being listed as endangered species.

“If that happens, it will bring huge changes to the surrounding community and affect future development of land,” Graham says. “We’re learning that, by collaborating with local landowners and various agencies, we may be able to reach a balance that preserves sensitive habitat, while protecting people’s livelihoods.” 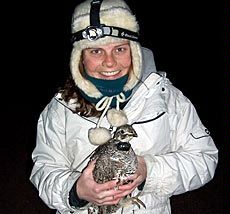 Braving frigid temperatures this past spring in a remote area of northwestern Utah, USU grad student Stephanie Graham holds a young sage-grouse hen. Graham won a grant from The Wildlife Society to further her research on sage-grouse habitat. 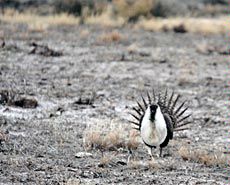 To attract a mate, a male sage-grouse struts on a 'lek' - a breeding ground – cleared of invasive plants and seeded with forage kochia by the BLM. Graham is studying how the imperiled birds react to attempts to restore critical habitat.