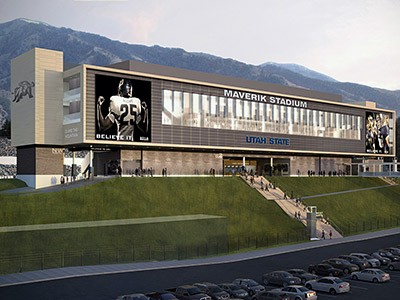 An architectural rendering of Maverik Stadium at Utah State University (a link to larger renderings is included at the bottom of the announcement text).

“The entire Maverik team is honored to continue our partnership with Utah State University and link our name to its iconic stadium,” said Tom Welch, CEO of Maverik, Inc. “As a community-centered business, we are committed to supporting and promoting our state’s universities’ athletic programs, and this opportunity with USU was our way to connect with the Aggies’ student body, alumni and Cache Valley as a whole. The new Maverik Stadium will proudly uphold the venue’s outstanding reputation in the Intermountain West.”

“The Maverik brand, their values and vision for growth in the Mountain West region is an ideal fit for Utah State University,” said USU Vice President and Director of Athletics Scott Barnes. “This new partnership is a catalyst for our stadium renovation initiative, which will commence immediately with the demolition of the west side press box and a portion of the west side seating. Further, this partnership assists in ensuring the already promising future of our football program and the enhanced fan experience. On behalf of our student-athletes, coaches and the entire Aggie Nation, I want to thank Tom Welch and Maverik for this exciting opportunity.”

The partnership with Utah State and Maverik is a multi-year agreement, which includes top-tier advertising rights and prominent signage on the exterior and interior of the stadium. Additionally, the venue will feature a Maverik concession outlet that will sell a number of Maverik proprietary food products.

“Utah State’s partnership with Maverik is mutually beneficial and makes good business sense,” said Jed Pitcher, retired president of The Regence Group and chair of the Stadium Expansion Strategic Planning Committee. “Maverik is known for its community involvement and encourages its employees to reach out in the areas where they serve. This is a great day to be an Aggie!”

Following his career at Utah State, Romney spent 11 years (1949-60) as the commissioner of the Mountain States/Skyline Conference.

“The renaming of Romney Stadium is a little bittersweet, but our family realizes that to be competitive and relevant in today’s sports world, you need to have the financial backing of corporate America,” said Richard Romney, grandson of E.L. ‘Dick’ Romney. “The Romney family has the desire for Utah State football to continue to grow and be successful and we strongly believe that this stadium project will go a long way to secure the future of the program, and will also make for a better fan experience.

“What grandpa accomplished at Utah State will never be duplicated in today’s society. We know his name will remain prominent and continue to have a strong legacy at Utah State. His story will not be forgotten.”

Renovations to Maverik Stadium will focus on greatly improving the overall fan experience. On the west side, a new four-story premium seating and press box structure will be built to include a state-of-the-art media and game operations area, 24 luxury suites, 20 loge boxes, more than 700 covered club seats and a premium club area that will also be used to host a student-athlete training table. Major concourse work will include significantly increased restrooms, upgraded concessions and an enlarged concourse for better pedestrian traffic flow.

Renovations will also include new video boards on both the north and south ends of the stadium, along with a new public address system. The additional expansion of Maverik Stadium’s seating capacity is also planned for the future.

Utah State’s football stadium has largely gone without any upgrades to the existing structure during its 47-year existence. The seating capacity has been altered twice; once in 1980 with the addition of approximately 10,000 seats to the south bowl, and again in 1997 when roughly 4,000 chair back seats were installed to bring the present capacity to 25,513.

In 2005, the south end zone area was renovated, providing improved concessions and restroom facilities, as well as a widened concourse on the east side of the stadium. And in 2008, the three-story, 69,000-square foot Jim and Carol Laub Athletics-Academics Complex was completed in the north end zone, providing enhanced athletic and academic needs for all 16 of USU’s varsity sports.

For more information on the renovations to Maverik Stadium or to pledge a gift, contact the USU Athletics Department at (435) 797-1850.

About Utah State Athletics
Utah State is concluding its second year as a member of the Mountain West Conference and has been a Division I-A/Bowl Championship Series football playing school in each of its 117 seasons of competition. USU is traditionally one of the strongest academic schools in the Rocky Mountain Region as its nearly 400 student-athletes have an 84 percent graduation success rate and a cumulative 3.17 grade-point average. Furthermore, Utah State has led its league in academic all-conference honorees 14 times in the past 16 years. On the fields of competition, Utah State's 16 varsity sports have combined to win 27 conference championships over the past nine years, while its football team played in its fourth-straight bowl game this past season, and is one of just four FBS programs to win at least 30 games and three-straight bowl games during the past three seasons. All-time, Utah State has produced 102 All-Americans and has won National Championships in volleyball (1978) and softball (1980, 1981), while its football team has played in 10 bowl games. USU men's basketball program has advanced to the NCAA Tournament 20 times in school history, while its volleyball program has played in the NCAA Tournament four times and its soccer program twice. In all, Utah State sponsors men's sports in basketball, cross country, football, golf, tennis, and indoor and outdoor track and field. Women's sports sponsored by USU include basketball, cross country, gymnastics, soccer, softball, tennis, indoor and outdoor track and field, and volleyball. Additional information is available online.

Maverik started when a young man from Wyoming decided to open a business in his hometown. In 1928, 20-year-old Reuel Call opened a two-pump gas station in Afton, Wyo., with money he earned from renting roller skates. The business soon grew, and he started providing fuel to surrounding towns and ranches. Now, Maverik is known as the best place to energize your body and fuel your vehicle for whatever adventure life throws at you. Maverik, with more than 250 locations across 10 western states, is known for its premium BonFireTM food -- made fresh in every Maverik, every day -- and awesome values on fuel, drinks and snacks. Maverik sells exclusive products such as Bundles, cinnamon rolls, breakfast sandwiches, burritos, hoagies, Glacier X Sports Drink, Mt. Mavalanche Frozen Yogurt and more.