Miller, who is a 1987 Utah State University alumnus, also serves on the National Advisory Board for Aggie Athletics.

“Scott Barnes and President (Stan) Albrecht worked very hard to get Utah State into a better conference and I think it is only appropriate that all Aggies, including myself, step forward financially to whatever degree they can to help support USU Athletics and give the student-athletes every opportunity to compete at the highest level on their fields and courts,” said Miller.

The $6.4 million, 21,000 square-foot strength and conditioning center was anchored by a $4.5 million anonymous lead gift and is expected to be completed in April of 2013, just in time for Utah State's official move to the Mountain West Conference on July 1, 2013.

All funding for the new strength and conditioning center came from private donations.

“This initiative simply wouldn’t have gotten out of the blocks as early as it has without Dave’s significant gift,” said Barnes. “We can’t thank him enough for his generosity. The timing was incredibly important in moving forward. Dave’s loyalty and passion for Aggie Athletics and Utah State University is infectious.”

The new facility will feature areas for weight training, cardiovascular workouts and speed and agility training, as well as offices for staff. Built on existing university property at the northwest corner of Romney Stadium, the state-of-the-art multi-level facility will alleviate overcrowding in the existing 5,800 square-foot strength and conditioning center and will accommodate almost 400 athletes from 16 sports programs.

The project is the latest in a series of recent athletic facility improvements at Utah State. In 2008, the university completed construction on the 69,000 square foot Jim & Carol Laub Athletics-Academics Complex. In 2009, USU opened the Steve Mothersell Athletics Hall of Honor as well as its new off-court basketball facilities, which include the Nate and Heather Wickizer men’s basketball and MerLynn Pitcher women’s basketball locker rooms. In 2010, USU opened the Dr. Randall and Julianne Stockham Student-Athlete Academic Hall of Honor and in 2011 a new synthetic turf was installed in the Stan Laub Indoor Training Center.

For more information on the new strength and conditioning center or to pledge a gift, contact the USU Athletics Department at (435) 797-1850. 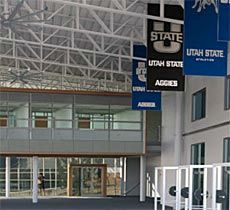