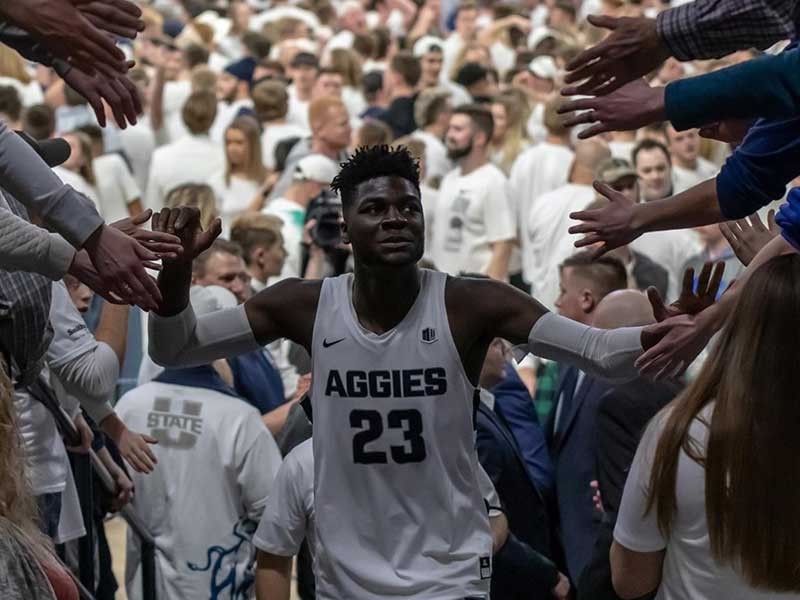 Download
Close Download
Junior guard Sam Merrill scored 29 points and freshman center Neemias Queta had 13 points and 11 rebounds, and Utah State pulled into a first-place tie in the Mountain West with a thrilling 81-76 victory over No. 12 Nevada in front of 10,387 fans Saturday night at the Dee Glen Smith Spectrum.

Merrill and Queta combined to score the Aggies’ first seven points, helping the hosts open a 7-3 lead with 16:20 left in the opening half. The lead changed hands six times during the first 20 minutes.

Nevada led 12-11 following a layup by Thurman with 11:42, but that was the final time the Wolf Pack enjoyed a lead.

After Thurman’s basket, the Aggies regained the lead for good on a dunk by Queta, sparking an 8-0 run. Utah State led by as many as nine in the first half before settling for a 37-33 lead at the break.

Utah State’s advantage ballooned to as many as 13 with 12:45 remaining in the game before Nevada started whittling away. The Wolf Pack pared the deficit to 69-67 with 3:02 left, but the Aggies made enough free throws down the stretch to pull off the upset.

Prior to the game, the Aggies honored their two seniors, forwards Dwayne Brown Jr. and Quinn Taylor. Brown came off the bench to score five points, including a thunderous dunk, while Taylor added two points, four rebounds, four blocks, three assists and one steal before fouling out.

Utah State wraps up the regular season on Tuesday, March 5, when the Aggies take on Colorado State. The game is slated to tip at 7 p.m. and will be televised live on AT&T Sports Net.