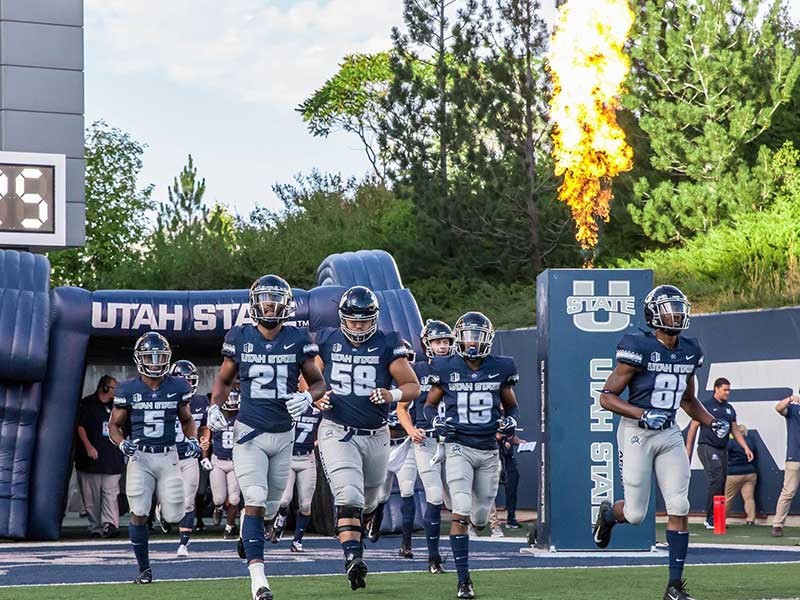 Utah State football is entering the 2019 season with high expectations and is garnering national attention as it received eight votes in The Associated Press preseason poll that was announced Monday to tie for 37th nationally.

Three of Utah State's opponents this fall were also listed in the preseason AP poll as LSU is ranked sixth in the nation, while Boise State and Fresno State both joined USU as other teams receiving votes. The Broncos check in at No. 33 and the Bulldogs are tied with USU at No. 37.

For Utah State, it is the first time receiving preseason votes since the 2014 campaign, when it garnered one vote in The Associated Press preseason poll.

Entering the 2019 season, Utah State is picked to finish second in the Mountain West, according to the conference's preseason poll, while five Aggies were named to the league's preseason team. Highlighting this group is junior QB Jordan Love, who was voted the MW's Preseason Offensive Player of the Year, while senior DE Tipa Galeai, senior CB DJ Williams, junior KR Savon Scarver and junior LB David Woodward were also named to the 25-man team.

This fall, Utah State returns nine starters (O-2, D-7) as part of 31 letterwinners (O-13, D-16, S-2), including two All-Americans and eight players that earned various all-Mountain West honors, from last year's team that ended the season ranked 21st in the final Amway Coaches poll and 22nd in the final Associated Press poll as it tied the school record for wins and best record with an 11-2 mark following its 52-13 win against North Texas in the New Mexico Bowl.

Utah State will open the 2019 season on Friday, Aug. 30, on the ACC Network at Wake Forest at 6 p.m. (MT) and begin its home season the following weekend against Stony Brook on Saturday, Sept. 7 at 5:30 p.m., in a game that will air exclusively on Facebook. Mountain West play begins for USU two weekends later at San Diego State on Saturday, Sept. 21, in a game that will be nationally televised on CBS Sports Network and begin at 8:30 p.m. (MT).

For Aggie football ticket information, fans can contact the USU Athletics Ticket Office over the phone by calling 1-888-USTATE-1 or 435-797-0305 during regular hours of operation. Fans can also buy their tickets in person at the USU Ticket Office inside the Dee Glen Smith Spectrum or online by clicking on the "Buy Tickets" tab atwww.UtahStateAggies.com.