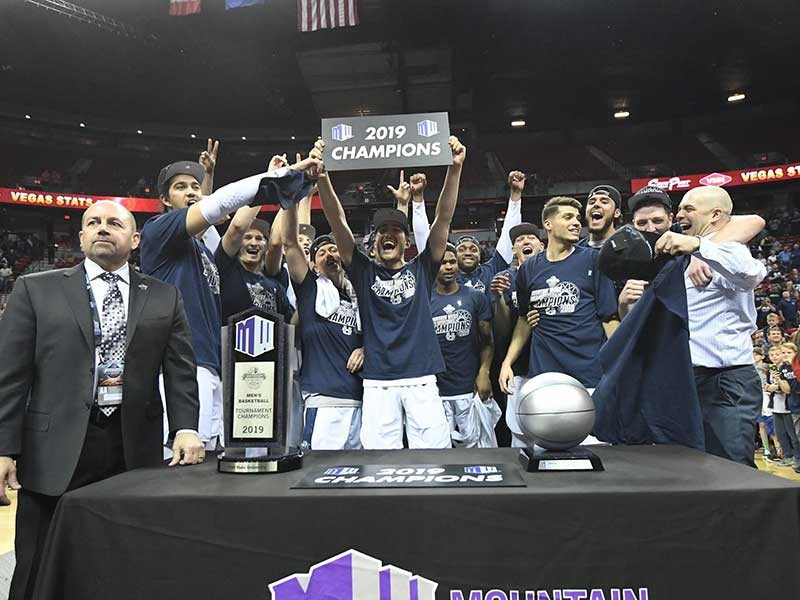 Merrill is the ninth Aggie to be award the tournament MVP, and the first since Brockeith Pane was named the WAC Tournament MVP during the 2011 season.

The first half stayed tight with 10 lead changes and seven ties. Utah State took a five-point lead at 21-16 after a trey from Porter and free throws from Queta. After SDSU tied it up at 26-26, a Merrill free throw and layups from Merrill and junior guard Diogo Brito gave the Aggies the 30-26 edge. The Aztecs tied it up at 32-32 with 1:29 on the clock, but free throws from Merrill would give the Aggies the 34-32 advantage at the half.

Utah State broke open the second half with an opening 13-0 run to take the 47-32 lead after a pair of Queta jumpers, and a triple of threes from Merrill and redshirt freshman guard Brock Miller. The Aggies maintained the double-digit lead until Aztec free throws and a couple 3-pointers cut the lead to five at 57-52 with 2:41 to play. A Queta layup and free throws from Brito and Merrill down the stretch secured the 64-57 Aggie victory.

With the victory, Utah State earns an automatic bid into the NCAA Tournament. The Aggies will find out their seed and matchup on Selection Sunday at 4 p.m. (MT), on March 17. The selection show will be televised by CBS.