An international team of researchers has sequenced the sheep genome for the first time, providing insight into how the animal evolved and providing a valuable resource for future research. Noelle Cockett, Utah State University executive vice president and provost and professor in the Department of Animal, Dairy and Veterinary Sciences, is one of more than 70 co-authors whose research on the sheep genome was published in the June 6 edition of the journal Science. Chunhua Wu, a postdoctoral fellow in Cockett’s lab is also among the study’s co-authors.

“The sheep genome sequence project spanned seven years and included at least a hundred people from across the world,” Cockett said. “Each person contributed their expertise in a particular aspect of the project, including collecting samples from key animals, harvesting the DNA and RNA, setting up the sequencing reactions and aligning the sequences into the assembly.”

Having a fully sequenced sheep genome is predicted to advance research in human and veterinary medicine, as well as act as an important resource for those involved in livestock production. The team’s research compared the newly sequenced sheep genome with known genetic traits of other animals, including goats, cattle and humans. By pinpointing where key changes were found in the sheep DNA, scientists were able to identify the genetic mutations that make domesticated sheep unique from their close relative, the goat, and other mammals.

“The final step was the most time consuming because this was the very first arrangement of the entire sheep genome sequence in a continuous line,” Cockett said.

She added that related information, such as the cattle genome sequence, the sheep linkage and physical maps, was available, but a lot of double and triple checking was needed to improve the accuracy of the sequence alignment. Genomes from one male and one female Texel sheep were independently sequenced and then compared to determine the location of genes, the natural variation between the sheep and sites in the body where specific genes are activated.

Researchers were specifically interested in the genetic components of wool production and the evolution of the rumen, the first compartment of the stomachs of ruminant animals where food is softened and fermented to aid in the digestion. After comparing the sheep genome to those of other animals that have a rumen, researchers discovered multiple amplifications or changes to sheep genes that may be linked to the animal’s unique ability to efficiently process foliage that is indigestible to many mammals, including humans. The completed genome sequence will be used by researchers to explore specific regions in the genome.   Cockett said one example of this type of work was comparing the sheep genome sequence with those of other ruminants. The comparison revealed a unique genetic component that is only found in ruminant species and is believed to have been a genetic change that allowed the ruminant digestive system to function.

Researchers were also interested in the metabolism of lipids in sheep and found they are activated in the animal’s hair follicles and skin, which may have played a role in the evolution of wool and the production of lanolin, or wool grease.

Cockett’s lab is collaborating with Stephen White, USDA/Agricultural Research Service at Washington State University, on a project to identify genetic elements involved in susceptibility to foot rot. By comparing genetic markers for animals with and without foot rot, they have identified a potential region on a specific chromosome and are now looking at that region in the genome assembly for genes and genetic control elements that might be involved.

“Without the genome assembly, we would need to isolate that specific region and do all of the sequencing ourselves, so the availability of the assembly is a huge time saver and will make our experiments more efficient,” Cockett said.

The paper can be seen on the Science website. 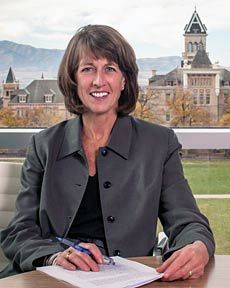 Noelle Cockett, USU executive vice president and provost and professor in the Department of Animal, Dairy and Veterinary Sciences, is one of more than 70 co-authors publishing research on the sheep genome in the June 6 edition of the journal Science.