One year before Americans head to the polls for the 2012 presidential election, nearly 20 percent of the population admitted they would not vote for a Mormon.

The Utah State University Religious Studies Program will screen a film, The Religious Test, that explores this phenomenon Oct. 2 in the Veterinary Science Building, Room 130, on USU’s Logan campus. The public is invited. The screening and question and answer session runs from 5:15 to 7 p.m. The filmmakers will be on hand for the discussion.

Independent filmmakers Trevor Hill and Michael Potter produced the documentary to explore why one in five Americans say they won’t support a member of The Church of Jesus Christ of Latter-day Saints for the nation’s top office.

The Religious Test is an attempt by Hill and Potter to explore religious intolerance in contemporary America. Both attended college at Utah universities and signed on to explore historical bias against Mormon political candidates after a 2011 Gallup Poll revealed the public’s wariness to vote for a Mormon president.

“Sadly, the recent Gallup Poll data didn’t surprise me,” Hill said on the film’s website. “What it did do was give me the resolve to set the record straight. The constitution prohibits a religious test for presidents, and yet it’s understandable that a candidate’s faith, convictions and beliefs would be of interest to the public. But where do we draw the line between political due diligence and constitutional infidelity?”

The film dissects perceptions and misconceptions of the Mormon faith and culture to understand the stigma minority religious groups face when seeking elected office. The Religious Test includes commentary from political leaders, academics and authors, including Sen. Joseph Lieberman, Mormon scholar Richard Bushman and Mormon author Joanna Brooks. It does not endorse a political candidate and aims to open the realm of public office to members of all religious faiths, the filmmakers write on their website.

USU Religious Studies Director Philip Barlow, the Arrington Chair of Mormon History and Culture, said he invited Hill and Potter to screen The Religious Test at USU because it tackles questions that persist in the political and religious arenas.

“The film raises important questions about the role of religion in American democracy,” Barlow said. “The audience should feel free to question the filmmakers, who will be present at the screening for discussion.”

Throughout Mitt Romney’s 2008 and 2012 presidential campaigns, reporters worldwide have contacted Barlow for insight as to how Romney’s Mormon faith would impact his ability to serve as leader of the free world. He understands all too well the confusion many have about the LDS faith.

“It is natural for voters to ask questions about Mormonism in light of Mr. Romney’s candidacy,” Barlow said. “The problem comes when people presume to know answers based on prejudice or poor sources. Or when the questions are rhetorical and posed publicly as scare tactics by religious or political rivals.”

The event is free and open to the public. Parking is available after 5 p.m. in the lot on the south side of Old Main. For more information about The Religious Test, see its website. 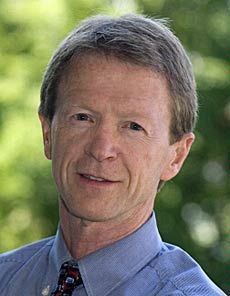 Philip Barlow, the Arrington Chair of Mormon History and Culture, directs the Religious Studies Program at Utah State. He invited the filmmakers of 'The Religious Test' to screen their film on campus Oct. 2.