When Utah State University engineering graduate student Jeff Kwong decided to participate in the NASA Means Business Competition, he was excited because he thought it would be an interesting way to get involved in the space exploration business.
Kwong's interest paid off as he was part of a team that was among the top five finalist teams in the nation to receive high accolades in the competition. Kwong worked with a group of USU teammates that included Ashley Cox, Skylar Cox, Megan Mitchell and Steve von Niederhausern. In its first year of competition, the Utah State team, along with faculty mentor Todd Mosher, received high honors for its entry in the contest, a set of video public service announcements for NASA.
"The space industry has so much more than a technological side," said Kwong. "Organizations such as NASA rely on the public's support to continue its programs, and this competition really focuses on gaining that support."
The NASA Means Business competition provides a chance to help NASA and its International Space Station partners tell their story to everyday people in new and more effective ways through the use of advertising, marketing, communication and journalism. The focus of the competition was on the International Space Station's role as a bridge to Mars, technology development, research opportunities, international cooperation and future exploration. The students were challenged to develop an International Space Station promotional plan, produce two 30- or 60-second promotional videos and to develop and implement a team outreach plan.
The team's strength and focus in the competition centered around the promotional videos, which showed an astronaut living the day as a regular working adult and as a child going to school.
"We were trying to do something that has never been done before when we made this commercial," said von Niederhausern. "We made a commercial to appeal to the younger audience base because the current mass of the workforce at NASA is retiring. We wanted to make something that would appeal to those entering the workforce over the next 20 years."
The team strove to keep the promotional videos humorous and lighthearted in order to reach out to the younger generation audience.
"Many people tend to think of NASA as a rigid organization so we tailored our videos to connect with the everyday person," said Kwong.
USU's many resources and expertise in space research, including the university's Space Dynamics Laboratory, became an asset for the team.
"I think we benefited from the exposure Utah State has in the area of space research," said Kwong.
Kwong hopes to become a systems engineer at a respected aerospace organization such as NASA and said that attending Utah State will help his future employment prospects. He said employers are aware of Utah State's strengths of space research and will be more likely to hire him because of his hands-on experience.
"Utah State prepares its students to perform well when they enter industry," said Kwong. "The senior design courses in engineering allow students to gain the practical problem-solving skills they need when they enter the workforce."
Mosher said Utah State stands out in its engineering offerings for students. Competitions such as NASA Means Business, NASA's Great Moonbuggy Race and the RASCAL competition, where students create future human exploration systems, are a few of the highlights. USU also provides opportunities in the small satellite area as well the space hardware arena.
"I am so proud of my Utah State NASA Means Business team," said Mosher. "We were the smallest team to enter the competition and were a bit of an underdog going against teams of 28 students from the University of Texas and 23 students from Arizona State, but we did great."
Next year the team plans to improve its outreach activities to further its success in the competition.
The competition is sponsored by the Texas Space Grant Consortium.
To learn more about Utah State's College of Engineering and its offerings, visit the college Web site. For more information on NASA Means Business, visit its Web site.  To see the commercials, visit the Utah State University Web site. 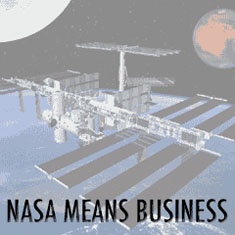